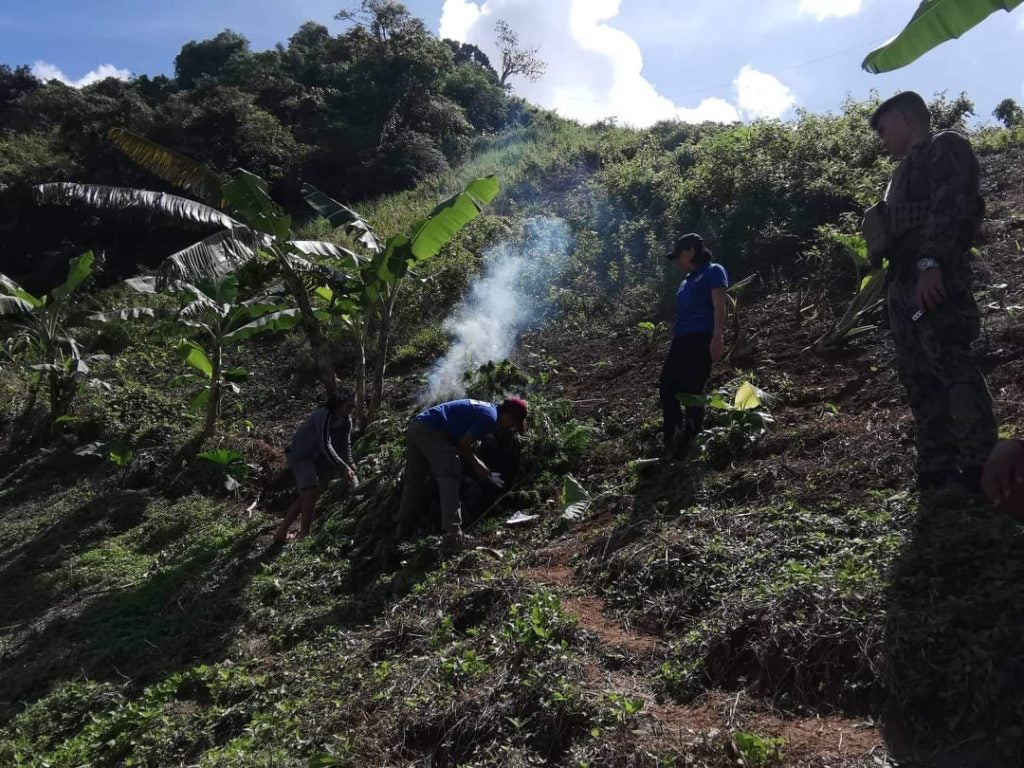 A joint marijuana eradication operation was conducted in Sitio Kaloctogan, Brgy. Pangamihan, Toledo City, on Saturday, September 18, resulting in the death of two individuals and the arrest of three others. | Photo courtesy of SOU-7

CEBU CITY, Philippines — Two suspected marijuana cultivators were killed when they shoot it out with operatives conducting a marijuana uprooting operation in Sitio Kaloctogan, Barangay Pangamihan in Toledo City, around 2 a.m. on Saturday, September 18, a top police official revealed.

Three other suspects were also arrested

Police Major Alejandro Batobalonos, chief of the Philippine National Police (PNP) Special Operations Unit (SOU7) said marijuana eradication operation turned into an armed encounter when operatives were allegedly fired upon by Eduardo Cabiles Jr., and a certain Gilbert who were both killed.

Batobalonos said they swooped down on the area after they were able to verify reports about the suspects’ involvement in the illegal drug trade.

Batobalonos said that before the encounter, police arrested three individuals identified as Reymark Cabiles of legal age, the subject of the operation, Renante Cama-ongay, and Envaristo Camaongay, the plantation’s alleged cultivators who are residents of the said barangay.

However, the other cultivator, identified as Ryan Cabiles, Reymark’s brother, managed to escape before the operating team arrived at around 2 a.m. on Saturday, September 18.

Operatives were able to uproot around 1,000 fully grown marijuana plants with an estimated market value of P2 million.

Police said the marijuana plantation covered 10,000 square meters. They said the uprooted marijuana were all burned on site.

Batobalonos said that after they finished uprooting and burning the plants they decided to pull out from the area bringing with them the three arrested suspects.

On their way out they passed by a house reportedly owned by a certain Eduardo Cabiles Sr., the alleged father of Reymark and Ryan Cabiles.

Batobalonos said they didn’t know that Eduardo and Gilbert were inside the house. The two allegedly fired at them first.

The encounter lasted for a few minutes which resulted in the death of Eduardo Jr., and Gilbert.

Batobalonos further said that the Cabileses are notorious marijuana cultivators not only in Toledo City but also in Danao City and Asturias town.

Batobalonos said there were at least 20 police personnel who conducted the operation this morning with at least eight belonging to the 2nd Provincial Mobile Force Company and twelve from the Philippine National Police Drug Enforcement Group (PDEG-7).

Batobalonos added that none of the police personnel was injured in the gunfight.

P20M worth of marijuana plants uprooted in  Toledo City