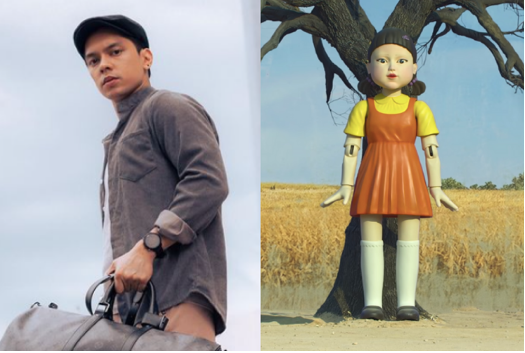 Carlo Aquino lamented his missed opportunity to join the ensemble cast of the South Korean series “Squid Game” because of COVID-19 travel restrictions.

The actor made this revelation by showing a throwback photo of a note he received from the series’ director Hwang Dong-hyuk on his Instagram Story last Friday, Sept. 24. The director thanked Aquino for his efforts and expressed excitement over working with him in the “near future.”

“This was supposedly a role for Squid Game,” Aquino said.

Beatrice Candaza, sister of Aquino’s partner Trina Candaza, said the actor was not able to film for the role due to travel restrictions, as seen on her Instagram Story, also last Friday.

“[Carlo Aquino] was supposed to play a role in Squid Game but travel restrictions happened. I remember Trina calling me and saying that they’ll stay in Korea for a few months back in 2020,” she said. “I’m sure there would be more opportunities.” 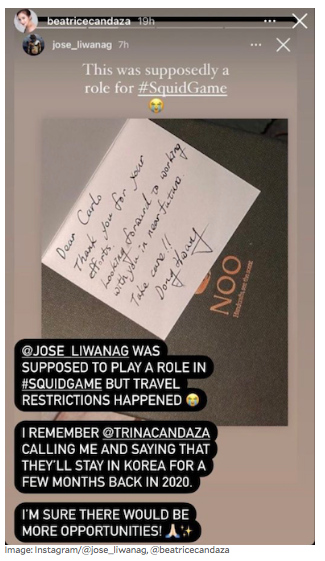 If Aquino had been able to travel to Korea, he would have been the second Filipino to appear in “Squid Game.” South Korea-based Filipino actor Christian Lagahit starred as Player 276 in the series.

“Squid Game” is a nine-episode Korean survival drama about 456 players competing in deadly versions of children’s games for a prize of 45.6 billion won (around P1.96 billion). It was released on streaming service Netflix last Sept. 17. JB