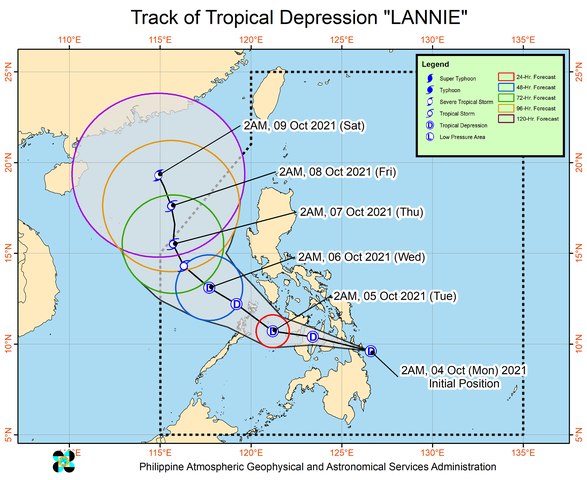 MANDAUE CITY, Cebu – Vessels were no longer allowed to sail starting 5 a.m. on Monday, October 4, after Cebu and parts of the Visayas were placed under Tropical Cyclone Warning Signal No. 1.

“Voyage of vessels will resume upon improvement of weather and sea condition in the above mentioned areas,” says an advisory that was issued by Commander Alvin Dagalea of the Coast Guard Station in Central Cebu.

“Vessels who intend to take shelter shall be permitted as long as it is manifested through written request and no passenger be allowed on board,” he added.

In its 5 a.m. advisory, the Philippine Atmospheric, Geophysical and Astronomical Services Administration (Pagasa) said that center of Tropical Depression “LANNIE” was located 100 kilometers east of Surigao City, Surigao del Norte.  It has maximum sustained winds of 45 kilometers per hour (km/h) near the center and gustiness of up to 55 km/h.

Tropical Cyclone Warning Signal No. 1 is now in affected  in the following areas: