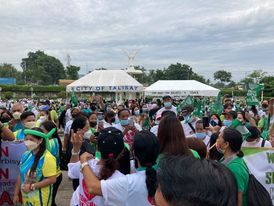 Supporters of Talisay City’s ruling party, Alayon, gather outside the city hall on Friday morning, October 8, 2021, to show their support of the full slate headed by Rhea Gullas, who is vying for the mayoral post, and Richard Francis “Choy” Aznar, who is running for Vice Mayor. | via Mae Fhel Gom-os

MANDAUE CITY, Cebu — Police in Talisay City said they did not expect the crowd of supporters to flock outside the city hall on Friday morning, October 8, 2021, or on the day of the filing of certificates of candidacy (COC) of the two opposing parties.

Police Lieutenant Jonel Abello, deputy chief for operations of the Talisay City Police Station, said that they did not expect a crowd of supporters, particularly of the Alayon Party, to flock to the city hall.

To avoid for the possible COVID-19 transmission, Abello said that they made sure that all of them had worn their face masks properly.

(What we just made sure despite them being close together, was for all of them to wear face masks. Removing the face masks from their nose and mouth was not allowed.)

Abello, however, said that while others heeded their call, there were also supporters inside the city hall compound.

(So, we just told them not to be closer to each other so that we cannot be seen by others who would say that he is a politician and it is okay [if there is no social distancing.])

Meanwhile, Abello said that prior to the arrival of the slate and supporters of Barug Lumad Talisaynon Party, headed by incumbent Talisay City Mayor Alan Bucao, they made sure that the city’s Plaza would be cleared with Alayon supporters.

The move was not just to avoid overcrowding but also to ensure that there would be no brawls between the supporters of both parties.

The full slate of Alayon, the local party in Talisay City, headed by Rhea Mae Gullas, who is vying for the mayoral post, and incumbent City Councilor Richard Francis “Choy” Aznar, who is running for vice mayor, filed their COC on Friday morning, almost two hours earlier than the opposition party.

Abello said the unexpected crowd of supporters would just like to show their full support to the slate, headed by the wife of incumbent Mayor Gerard Anthony “Samsam” Gullas, who accompanied the said party during their COC filing.