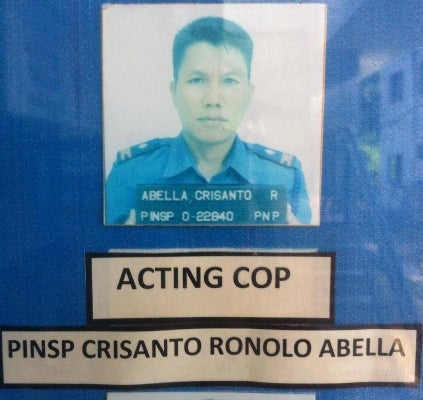 The police chief of Alcoy town in southern Cebu was fatally gunned down by a barangay councilman during a drinking session outside the town’s gymnasium Sunday evening.

The shooting shocked colleagues because both of them were good friends.

Insp. Crisanto Abella, 44, a resident of barangay Guadalupe, Cebu City, was hit in the head, back, armpit and leg.

He was pronounced dead at the Cardinal Rosales Memorial Hospital in Dalaguete town, according to his deputy, SP02 Primitivo Carungay.

The suspect, Ciriaco de los Santos, 56, a member of the barangay council of Poblacion, was immediately arrested by Alcoy police.

The suspect is a cousin of Alcoy Mayor Nicomedes delos Santos and was a former policeman.

The mayor said Ciriaco was once jailed for killing a suspected thief who took his sibling’s bag but was later acquitted and left the police service to work abroad.

The mayor confirmed that before the shooting, he saw his cousin and the police officer looking intoxicated at a boxing event during the town’s fiesta.

He said he asked SP02 Carungay to take the police chief back to the police station to avoid a scandal.

A few minutes later, he received a text message from Carungay telling him that Insp. Abella refused to go with him and even reprimanded him.

While watching the the boxing match, the mayor said, he heard at least five gunshots.

P02 Wilt Harris Almagro, one of the policemen assigned to secure the event, said Insp. Abella was inside the gym when the barangay councilman invited him to go outside for a round of drinks.

He said they didn’t expect trouble because both men were good friends.

After the shooting, Ciriaco took the police official’s .9mm pistol and ran to a nearby hut.

Almagro said Ciriaco fired a shot at the police prompting them to return fire.

Mayor de los Santos and the councilman’s family who arrived at the scene convinced him to surrender.

Police seized a .45 cal. pistol from the councilman.

They also found the slain police officer’s service pistol inside the hut.

P03 Emilio Carungay said Insp. Abella and the suspect started arguing after the councilman confronted him for his failure to arrest some troublemakers in barangay Nug-as, a mountain barangay in Alcoy

Abella reportedly snarled at the councilman and told him to mind his own business.

The suspect however, denied shooting the victim.

He said he ran away after hearing gunfire.

He refused to make further comment until he gets legal advice.
Mayor delos Santos said he was shocked by the turn of events.

He called on local policemen to take the incident as a lesson not to drink while they’re on duty.

The mayor said Abella was a respected police officer which is why officials sought for an extension of his tour of duty in the town.

His term as chief of police ended last Aug. 5.

She said he would have still been alive had he been given a new assignment.