Six areas in Luzon under Signal No. 2 due to Tropical Storm Maring 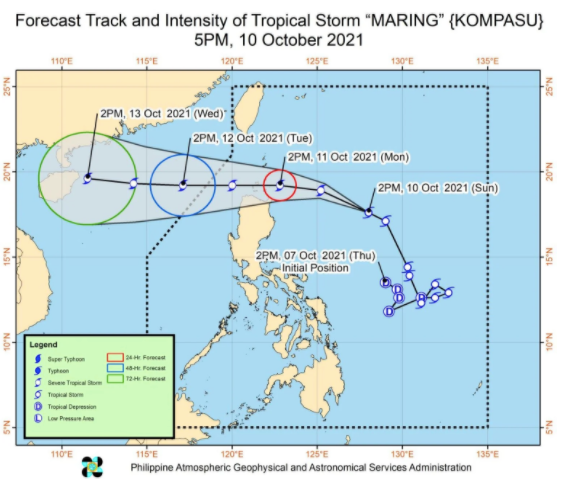 Based on Pagasa’s latest storm bulletin at 5:00 p.m., damaging gale-force to storm-force winds are expected to prevail in the next 24 hours over areas under Signal No. 2.

Meanwhile, strong winds are expected within the next 36 hours in the 18 areas under Signal No. 1.

The storm slowed down and is currently moving west northwestward at 20 kilometers per hour (kph), with maximum sustained winds of 85 kph near the center and gustiness of up to 105 kph.

The following areas are under Signal No. 2:

The following areas are under Signal No. 1:

Gale warning is also up in the eastern seaboards of Central Luzon, Southern Luzon, and Visayas.

Rough to very rough seas are expected in these areas, with wave height reaching 4.5 meters.

Read Next
Dindin aspires for longevity like her Thai idol Pleumjit