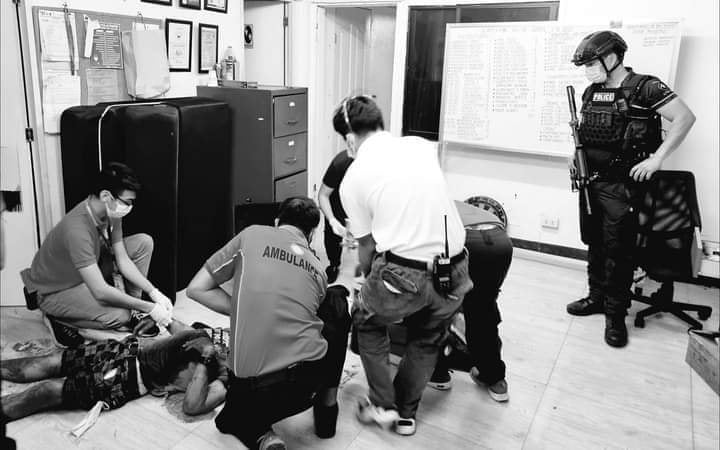 A man, who used to work as a security guard, died after he was shot in the head by responding SWAT personnel. | Contributed photo

CEBU CITY, Philippines — Ernesto Benedicto Jr., 31, wanted to go back home to his family in Cagayan de Oro City but he did not have money to spend for his fare.

He decided to visit his former employer, Dasia Security Agency that holds office along Jakosalem Street in Barangay Zapatera in Cebu City, on Monday, October 11, to ask for refund of the cash bond that he paid when he applied for employment in 2019.

His former co-workers said that Benedicto started to act strange after he was told that the money will not be available for another week. He hid inside the security agency’s armoury, took a .38 caliber revolver and started to fire this indiscriminately.

Beneficto, who was wounded by responding personnel of Cebu City’s Special Weapons and Tactics (SWAT) who tried to neutralize him, later on died while being treated for a bullet wound on his head, says Police Lieutenant Colonel Wilbert Parilla, deputy director fo operations of Cebu City Police Office

(He may have missed his family that is why he lost his mind.)

Parilla said they will include in their ongoing investigation the possible lapses that may have been committed by the security agency’s management which resulted to Benedicto’s death.

Officials of Dasia Security Agency are yet to issue a statement on the incident.

CDN Digital visited their office on Tuesday, October 12, but it was close.  They could not also be reached using their landline numbers.

According to the police, Benedicto joined the security agency in 2019 and resigned in August 2021.

On Monday afternoon, Benedicto visited the agency’s office to ask for the release of his cash bond because he needed it for his fare back to Cagayan.

(He visited the Dasia office on Monday to get the security bond that he paid because he wanted to already go home but the manager told him that the money will be available until next week.  He was also told that an armoured truck from their security agency is set to be delivered to Cagayan next week, so he can ride with them to save on his transportation cost.)

After his talk with the agency’s manager, Benedicto decided to linger inside the office.

Office personnel did not notice him hide in their kitchen.

Parilla said that when employees started to leave at 5 p.m., Benedicto transferred to the armoury and locked himself inside.

An employee, who saw Benedicto enter the armoury, convinced him to come out but he allegedly refused.

Police Lieutenant Rolando Amor of Parian Police Station tried to negotiate with Benedicto but he continued to lock himself inside the armoury.

SWAT personnel who came to assist Amor also tried to negotiation with Benedicto, but he allegedly took a .38 caliber revolver and fired at them.

Benedicto was shot in the head by one of the responding SWAT personnel.

Police also recovered three cartridges from a .38 caliber near his body.

Medics tried to revive Benedicto and brought him to the Cebu City Medical Center but he died three hours later or at 9:15 p.m.