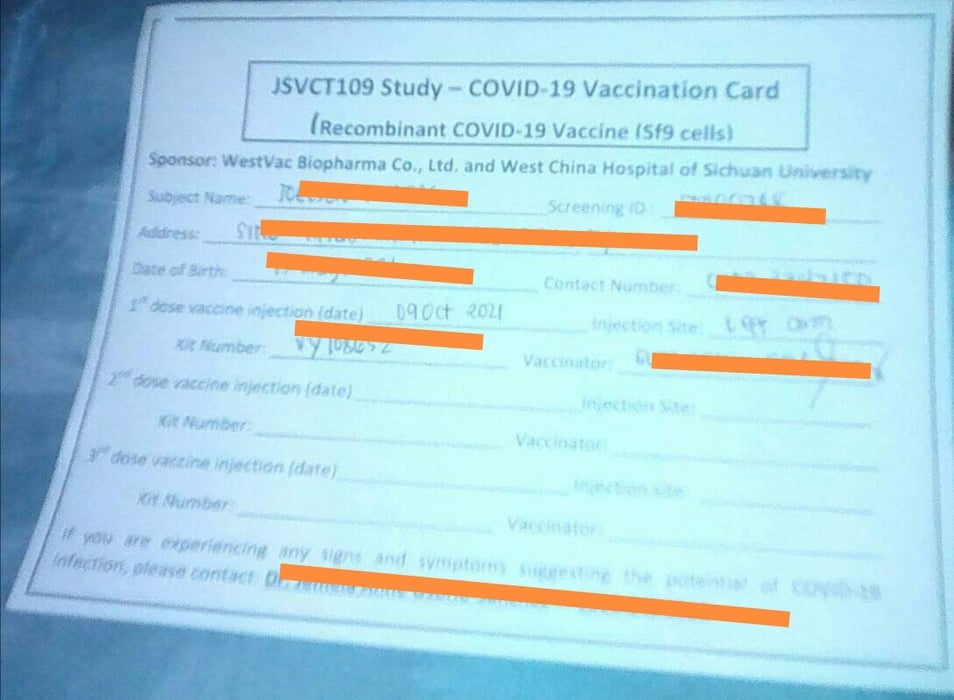 A vaccination card from a clincial trial by WestVac BioPharma in Cebu City. | Courtesy of Councilor David Tumulak

This after residents from Barangays Labangon, Basak San Nicolas, Basak Pardo, Cogon Pardo, and Inayawan reported they were getting vaccinated through a program, which they thought was connected to the national government’s vaccination program.

The residents reported to Councilor David Tumulak that they were screened in a hospital in the city and when they passed, they were inoculated with an unfamiliar brand of vaccine.

Each individual was paid P2,500 to P5,000 to get vaccinated with this relatively unknown COVID-19 vaccine.

Tumulak presented vaccine cards issued by the said company in a privilege speech to the City Council on October 13, 2021. He raised the concern why the trial was being done in Cebu City among impoverished populations in the coastal barangays.

“They were vaccinated of this WestVac, they were not given a (city approved) vaccination card, and they were offered a certain amount. Makapahibong man gud kaayo nga nagsige tag bakuna og mga vaccines nga nailhan nato but we have never heard of this WestVac,” said Tumulak in a privilege speech.

Based on the councilor’s research, WestVac has 40,000 participants from Indonesia, Kenya, and the Philippines.

The councilor is concerned that this clinical trial would pose a danger to the residents and would also significantly affect the current vaccination program in the city.

The City Council echoed the concerns of Tumulak and has requested the Food and Drugs Administration (FDA) as well as the Department of Health (DOH) to explain what the clinical trial is about and whether the involved residents understand the risk they are taking.

The council also instructed the Cebu City Health to investigate the affected barangays to check the status of these individuals inoculated with the WestVac vaccine. 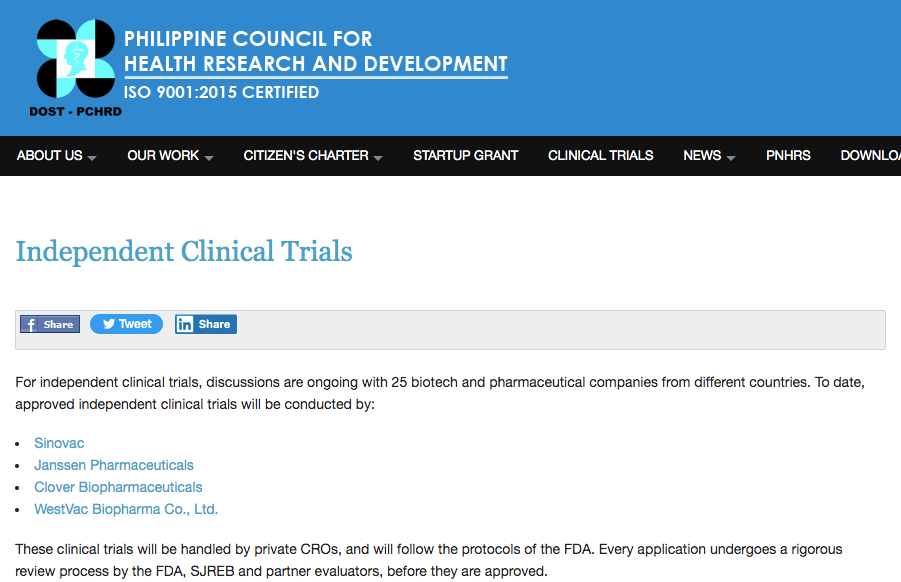 In the Department of Science and Technology (DOST) website, the Philippine Council for Research and Development has listed WestVac Biopharma Co., Ltd., as among the four companies given authorization to conduct independent clincial trials for a COVID-19 vaccine.

Others include Sinovac, Jansenn Pharmaceuticals, and Clover Biopharmaceuticals, but only WestVac has a clinical trial location in Cebu City at a private hospital.

Hospitals where WestVac is conducting its clinical trials.

Based on their registry, WestVac is already on the Phase III of their randomized, double-blind, placebo-controlled clinical trial to evaluate the efficacy, safety, and immunogenicity of recombinant COVID-19 vaccine (Sf9 cells), for the prevention of COVID-19 in adults aged 18 years and older.

Under their project description, “The study will enroll participants/subjects who have no known history of SARS-CoV-2 infection but whose locations or circumstances put them at appreciable risk of acquiring COVID-19 or SARS-CoV-2 infection. Subject’s ≥ 60 years old will account for about 10% of all enrolled subjects. All participants will receive three doses of either study vaccine or placebo on Day 0, Day 21, and Day 42 in a ratio of 1:1.”

The Phase III clinical trial should be completed within 14 months since it began in July 30, 2021. It was approved on June 28, 2021, by the Food and Drug Administration.

The details of the clinical trial can be found in the registry.

A doctor and reasearcher from the hospital where WestVac operates in Cebu City, who requested anonymity, told CDN Digital that it is common for clinical trials to pay their subjects who “willingly subject themselves to the trial.”

CDN Digital has sent an e-mail to WestVac to get a comment on the concerns of the City Council, but the company has yet to respond as of time of writing.

Tumulak said that the clinical trial’s approach to their subjects may not have been clearly understood by residents.

Most of subjects thought the vaccine is among the brands being distributed by the city government, but were surprised that their vaccine cards could not be accepted as legitimate by government authorities.

Many of them did not have actual vaccine cards and instead only have a document for the clinical trial.

“If legit siya, pahibaw-on unta ang city or they will inform the public so as not to create doubts. We are willing to help to dssiminate info if they properly inform us. The City government is extending our resources and manpower to urge the public to be vaccinated, that is why proper coordination is needed,” said Tumulak.

Tumulak hopes national agencies can explain the existence of the clinical trial and ensure its safety for residents.