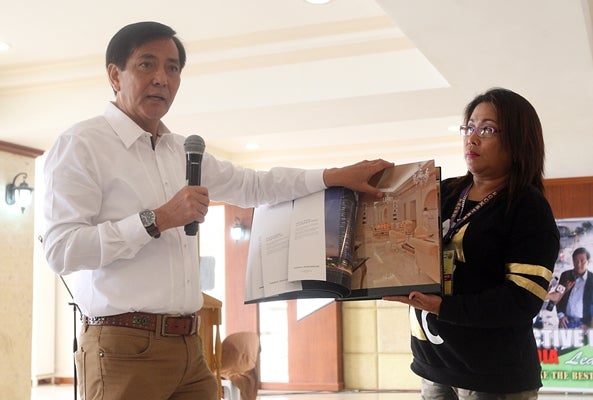 In this file photo, Cebu City Mayor Mike Rama shows the media sample projects of developers who plan to invest on the nine hectares, former Kawit Island at the SRP. (CDN PHOTO/TONEE DESPOJO)

Top officers of the Barangay Councilors League of the Philippines (BCLP) in Cebu City are supporting the sale of lots in the South Road Properties (SRP).

In a news conference yesterday, BCLP officers led by its president and Kamputhaw barangay councilman Raymond Garcia said they are aware that the sale would bring in large revenues. for the city.

“This is our own initiative. We weren’t asked to make a manifesto. We just saw the benefits from selling the lots. With at least P12 billion from sale, the city can pay the SRP loan, build a state-of-the-art hospital and create more jobs,” Garcia said.

All 16 BCLP officers are allies of Cebu City Mayor Michael Rama, who was recently authorized by a City Council resolution to negotiate with prospective buyers and sell 24 hectares through public bidding.

Garcia said he was confident this would be supported by most of the 560 barangay council members in the city.

“We were able to talk with some of the members. I think around 80 percent also support the manifesto,” Garcia said.

City Council majority floor leader Margot Osmeña, wife of former mayor and congressman Tomas Osmeña, said the show of support was expected and that she has no problem with the sale of SRP lots.

“It’s the process – when and how and to whom – that we’re concerned about. On the sale per se, there is nothing wrong,” she said.

However, Osmeña questioned City Accountant Mark Solomon’s statement that the city’s coffers will “continue to bleed” unless a remedy is found to resolve the city’s SRP loan in yesterday’s budget hearing for the proposed second supplemental budget (SB2).

Solomon made the statement in an executive session on the proposal to convert the SRP loan from yen to peso last Friday.

Osmeña questioned why the executive department used P45 million worth of “gains on foreign exchange” as part of the fund sources for a supplemental budget in 2013.

But Solomon explained that the P45 million “gains on foreign exchange” from the P119 million principal payment for the SRP last year was overestimated.

“Why are we overestimating the SRP loan payment? That’s dangerous. There should be actual money in the bank to fund the SB,” Osmeña said.

Read Next
Septage fees for haulers next month