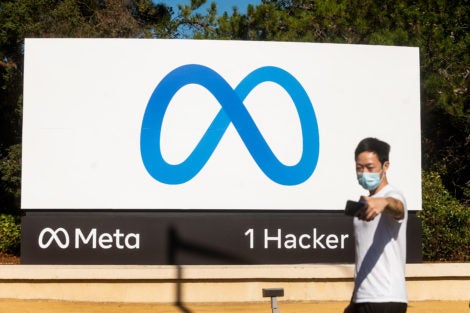 A person takes a selfie in front of a newly unveiled logo for “Meta”, the new name for Facebook’s parent company, outside Facebook headquarters in Menlo Park on October 28, 2021.  | Photo by NOAH BERGER / AFP

WASHINGTON — Facebook’s name change offers a convenient diversion as scandal plagues the platform, but the new handle is also key to the firm’s costly effort to save itself from very real threats, experts said.

Jokes and vitriol poured in after CEO Mark Zuckerberg unveiled the new corporate handle “Meta,” with critics blasting it as a transparent effort to distract from its whistleblower crisis.

But Zuckerberg argued the name demonstrates the company’s commitment to building its “metaverse,” a virtual reality version of the internet that would make online experiences — like chatting with a friend or attending a concert — feel face-to-face.

Making a success of the aspirational ambition though would help address real, long-term threats like an eroding youth user base, regulatory scrutiny and even the sway fellow giants like Apple hold over Facebook.

“With this announcement, Mark Zuckerberg revealed his end game: He’s making a play to control the future of the internet,” said Evan Greer, director of digital advocacy group Fight for the Future.

Zuckerberg said the firm’s metaverse investment will take a $10 billion bite out of the company’s profit this year, and earlier this month Facebook announced plans to hire 10,000 people in the European Union over the next five years for the project.

Zuckerberg’s pitch of an immersive, virtual world of real-looking concerts, sports, and meetings that can be attended via a headset is, even he admits, a ways off.

Since the launch a year ago of the Quest 2 virtual reality headset, from the Facebook-owned brand Oculus, about 1.87 million devices have been sold worldwide, according to researchers at Statista.

At this point, they’re mainly used to play immersive games, with controllers for a game of tennis, for example.

Facebook has also begun building more informal spaces, such as “workrooms,” where participants appear around a round table as personalized avatars that look like cartoon characters.

Building up the metaverse will happen as the company undertakes what Zuckerberg called a “retooling” to focus on young adults — people aged 18-29.

Facebook has been losing young people for years to other platforms — the rise of TikTok has been a particular threat — but it has continued to grow.

However, as Zuckerberg’s comments show, concern is building about keeping those people and the aim is that the metaverse will help.

“We hope that by the end of the decade that we can help a billion people use the metaverse and support hundreds of billions of dollars of digital commerce,” he told an earnings call this week.

Regulators are circling the platform after whistleblower Frances Haugen leaked reams of internal company documents showing executives know of the harm its products may cause to teens, public discourse, and democracy.

Though US lawmakers have failed serially to keep up with social media’s evolution and thus its regulation, the latest crisis has given new impetus to those efforts.

The metaverse Zuckerberg strolled through in Thursday’s promotional pitch was a friendly place of connection and did not evoke the angry political fights or anti-vaccine misinformation that discolors social media.

Getting control of what Facebook sees as the future of online life would also position the company to slip past the power of Apple and Google.

Apple’s iPhone privacy changes, which allow users to block tracking, have significantly affected its advertising revenues because fewer data could be collected.

The move by Apple earlier this year has sparked a rift with Facebook and other tech rivals and could have major implications for data privacy and the mobile ecosystem.

“We… see this rebrand as a marker of the company’s desire to build and own the rails of what it believes to be the next major computing platform,” said analyst Audrey Schomer from eMarketer.

On top of the risks and costs of betting huge on what is essentially a vision for the future, analysts noted Facebook has chosen a turbulent moment to change its name.

“Rebranding is not just changing a name, rebranding is also embracing a completely different operating model,” he told AFP.

“Where it will fail or succeed is going to be about what they are tangibly going to change,” he added.