One dead after motorbanca capsizes off the shore of Daanbantayan 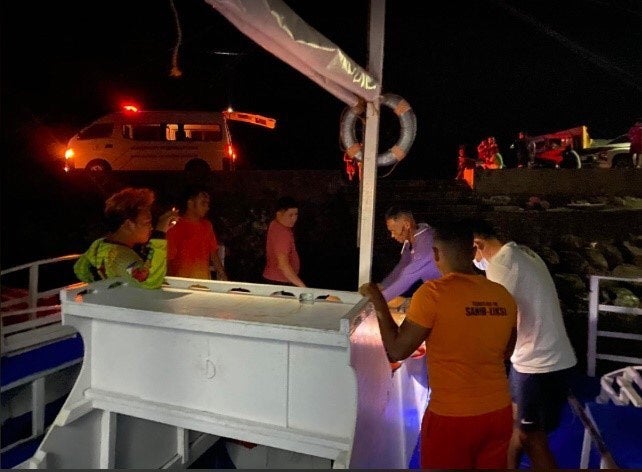 Rescue of the passengers and crew of a motorbanca that capsized off the shore of Daanbantayan town in northern Cebu. | Photo courtesy of PCG-7

CEBU CITY, Philippines — A female senior citizen died after floating off the shore in Daanbantayan town in northern Cebu for more than three hours when the motorbanca that she was riding on along with her relatives on the way to Carnaza island capsized.

Rustica Oyaw, 69 years old and a resident of Carnaza island, was among the 53 victims of the capsized Motorbanca Mercery off De Gato Island and Carnaza Island in Daanbantayan, Cebu, at past 5:30 p.m. of October 29, 2021.

According to the report of the Philippine Coast Guard in Central Visayas (PCG-7), the motorbanca, which was overloaded, capsized at past 5:30 p.m. but the report reached them at 8 p.m. while retrieval operations began around 9 p.m., which means that the passengers and crew were floating at sea for more than three hours.

The exposure of the elements and the physical fatigue may have caused the death of Oyaw.

In a phone interview with CDN Digital, Salcedo said that initially only 51 rescued individuals were reported, including the body of the lone casualty, as two individuals – a passenger and crew member were unaccounted for upon arrival of those rescued in Maya Port, Daanbantayan.

It turned out that one of the crewmembers hid from authorities, knowing that they might be charged for the incident and the other one, who may be a passenger, immediately went to the hospital as three other passengers were injured in the incident.

(One hid while the other one went straight to the hospital so this was not report immediately.)

Currently the captain of the motorbanca, Jojie Diano, along with his motorman, Luz Commendador, and crew Napolion Catam-isan, Rey-ar Quezon. Kyle Ven Alcantara, Ralf Denzo, and Stephen Arriesgado are detained in the Daanbantayan Police Station.

They may be charged with reckless imprudence resulting in homicide due to the capsizing and the death of the senior citizen.

Further reports of PCG-7 revealed that the motorbanca’s capacity should have been only 26 individuals, but at the moment of departure, it carried 53 including the crew.

Aside from overloading, the captain and crew also committed other violations including not getting a clearance upon departure from port, and failure to submit a Master’s Declaration of Safe Departure (MDSD).

Salcedo said these were the multiple violations the captain crew might face due to the incident.

The PCG-7 noted in their report that the group were actually relatives and family members of roughly the same clan in Carnaza Island.

Salcedo said that many were going home to their localities because of the long weekend. This may have prompted unauthorized travels for smaller motorbancas such as Mercery.

He reminded operators of motorbancas to secure the necessary permits upon and travelling and to follow the safety procedures in order to avoid accidents.

Passengers must also be on the lookout for unauthorized motorbancas because their lives will be put in danger if anything happens at sea.