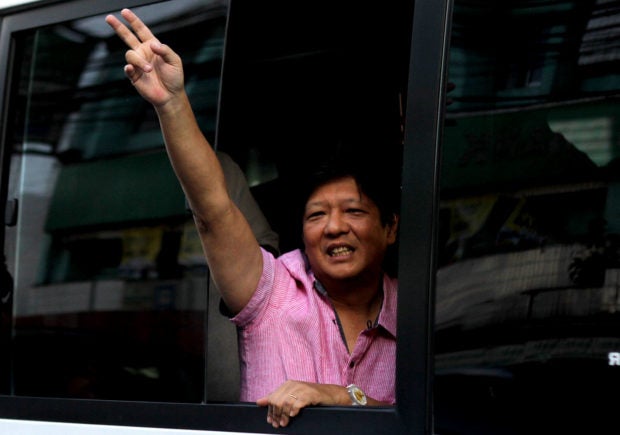 MANILA, Philippines — A petition to cancel the certificate of candidacy (COC) of former senator Ferdinand “Bongbong” Marcos Jr. for the presidency has been filed at the Commission on Elections (Comelec).

The petitioners, composed of political detainees and human rights and medical organizations that opposed Marcos’ dictatorship, claim that Marcos Jr. is not eligible to run for any public office since the Quezon City Regional Trial Court convicted him in 1995 for his failure to file income tax returns.

In a statement shared by their lawyer Theodore Te, the petitioners said that Marcos’ COC “contains multiple false material representations.” The petition was filed before the Comelec on Tuesday.

“Specifically, Marcos falsified his Certificate of Candidacy when he claimed that he was eligible to be a candidate for president of the Philippines in the 2022 national elections when in fact he is disqualified from doing so,” they said.

“Marcos is not eligible to run for any public office as he is, plainly, a convicted criminal. Marcos was convicted by the Regional Trial Court of Quezon City in a July 27 1995 Decision for his multiple failures to file income tax returns,” the petitioners added.

They noted that the Court of Appeals upheld Marcos’ conviction and no longer appealed to the Supreme Court, thereby becoming a final and unappealable conviction.

“Having been convicted by final judgment of a violation of the
National Internal Revenue Code (NIRC), Marcos is perpetually disqualified from holding any public office, to vote and to participate in any election as mandated under the NIRC,” they stressed.

Further, the petitioners also said that “the crimes for which Marcos was convicted by [the] final [judgment] are also crimes involving moral turpitude that disqualifies Marcos from being a candidate for any office under Section 12 of the Omnibus Election Code.”

The petition noted that the crime involves moral turpitude since, among others, Marcos and his family refuse to pay to the Filipino people roughly P203.8 billion in estate taxes, inclusive of interests, surcharge, and other penalties.

As of this posting, INQUIRER.net is still seeking comment from Marcos’ camp through his chief of staff Atty. Victor Rodriguez but has yet to receive a response.

Read Next
Talisay City starts vaccination of minors on Nov. 3