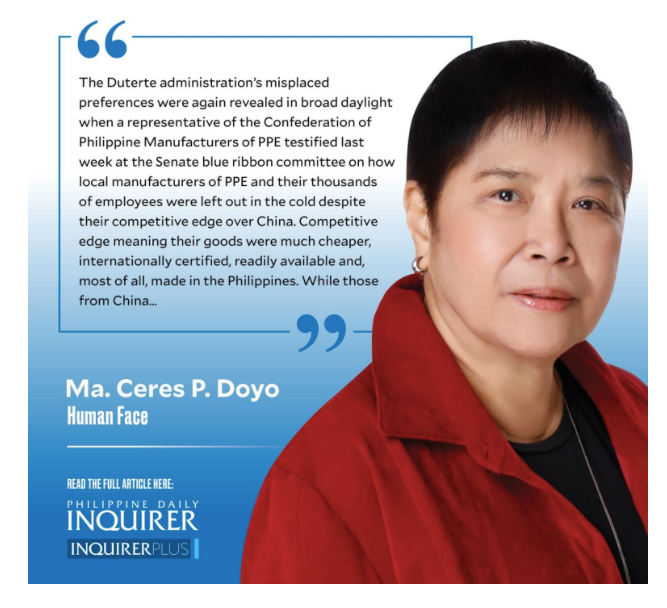 We are no longer getting curiouser and curiouser, to use Alice’s immortal words, just perpetually asking, why? Why the Duterte government’s preference for most anything that is China’s or Chinese-owned? (We are not referring to our Chinoys or Chinese-Filipinos.) From anti-COVID-19 vaccines to personal protective equipment to…

The Duterte administration’s misplaced preferences were again revealed in broad daylight when a representative of the Coalition of Philippine Manufacturers of PPE (CPMP) testified last week at the Senate blue ribbon committee hearing chaired by Sen. Richard Gordon. CPMP executive director Rosette Carrillo and board advisor Maritess Jocson-Agoncillo, also executive director of the Confederation of Wearable Exporters of the Philippines (Conwep), testified on how local manufacturers of PPE and their thousands of employees were left out in the cold despite their competitive edge over China. Competitive edge meaning their goods were much cheaper, internationally certified, readily available and, most of all, made in the Philippines. While those from China…

Recall that a multibillion procurement of PPE was awarded to an extremely undercapitalized China-based overnighter company named Pharmally. No thanks to the Procurement Service of the Department of Budget and Management (PS-DBM) that did not exercise so-called due diligence, or if it did, it did in the interest of foreign manufacturers with little or no track record instead of favoring Filipino manufacturers.

Those who have been following the Pharmally case were shocked beyond belief when President Duterte prevented his subalterns from testifying. Well, the lid has been blown away anyway. And there is still more to know. The case of the local PPE manufacturers who are the immediate losers (along with the Filipino citizenry, of course) should not be treated as a side issue.

I myself was so enraged while I was listening to CPMP’s tale of woe presented by its officers, while in the same hearing a Pharmally underling made feeble attempts to wiggle out. I am not the kind that throws objects at the TV when liars appear but I did utter some expletives in the Klingon language.

I sought out the CPMP to get a copy of their statement as I had a hard time transcribing it from YouTube. I got the statement close to the deadline of this column.

The CPMP and Conwep presented four concerns: 1) Standards and testing in the current government procurement process. There is no emphasis on the importance of PPE as a medical device or the need to pass international standards and the validation of certification. Only required was for the PPE to be “surgical, disposable, ear loop, 3-ply, wired.” This makes the CPMP no match against mere repackers of substandard PPE.

2) Dumping of substandard PPE from foreign sources. These PPE could endanger health care workers. The dumping resulted in cancellation of orders and massive lay-offs. The locals had to “repurpose” their factories to save jobs.

3) Preference for traders/importers over local exporters under current government procurement process. “PS-DBM would demand short-term deliveries for high volume, high value orders of PPE … This was a disadvantage because before [we] could even begin manufacturing, [our] raw materials had to pass international testing standards. The process added four weeks to the production cycle. Meanwhile the traders/importers will not have to bother with any of this.” Space constraints prevent me from enumerating the other hurdles.

And it is not true that “nagkaubusan na” (supplies were running low), so the Duterte administration’s preference for imported substandard PPE.

4) Ensure and maintain “a stockpiling program” that would respond to public health emergencies. This would bring back jobs lost and generate more.

According to the CPMP and Conwep, they intended to retain 7,450 jobs for their repurposed operations. They were committed to invest $35 million to produce medical-grade PPE at par with global players. But if the government does not improve its procurement process, all these will be for naught.

The local PPE manufacturers/exporters are optimistic about the proposed Pandemic Protection Act that would encourage “buy Filipino,” stockpiling, long-term sustainability, and local production of medical-grade PPE that is in keeping with national health security.

Sadly, the statement said, most CPMP members have stopped manufacturing, but “we have not lost sight of our vision to manufacture medical-grade PPE for every Filipino healthcare worker.”

Government paying high for substandard merchandise from undercapitalized PPE traders meant a windfall of Ferraris, Lamborghinis, and Porsches for the chosen few. Shame on you.