Moreno to prioritize ‘life and livelihood’ if elected president 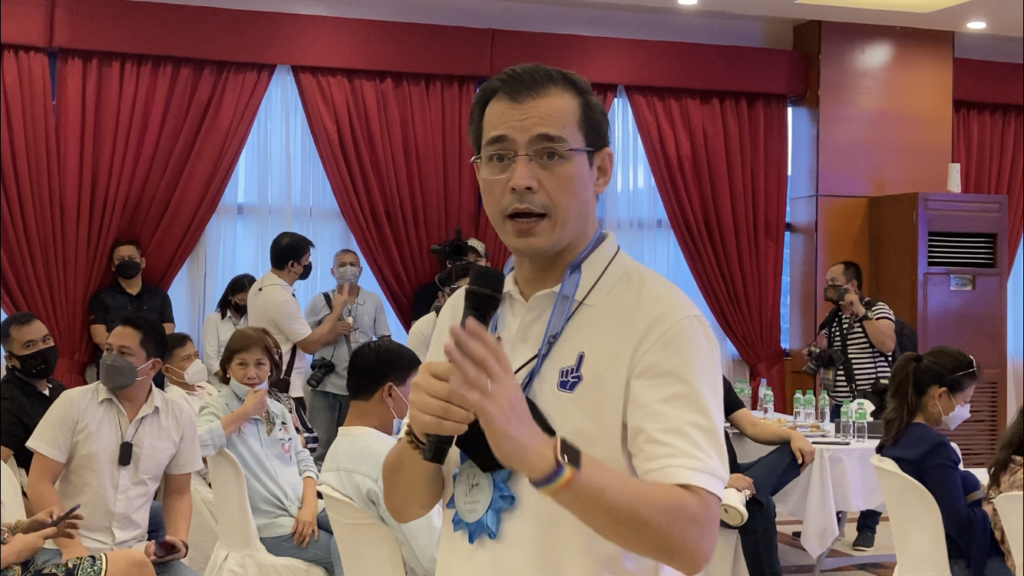 Manila City Mayor addresses employees of Cebu CFI Community Cooperative and other guest cooperatives to ask for their support in the May 2022 elections. | via Mae Fhel Gom-os

MANDAUE CITY, Cebu – Manila City Mayor Francsico “Isko Moreno” Domagoso made a promise to prioritize life and livelihood if he is elected as the country’s next president.

During his visit at the Cebu CFI Community Cooperative building in Cebu City on Friday afternoon, November 5, Moreno said these will be his “utmost concerns” in the next two years.

This as he asked over 150,000 members of the cooperative nationwide for their support in next year’s elections.

Moreno noted that a lot individuals lost their jobs during the COVID-19 pandemic, the reason why he promised to create more jobs opportunities and lower oil prices and taxes if elected president.

The incumbent mayor said he decided to visit the CFI Community Cooperative because he was inspired by how the Garcia matriach, the late Judge Esperanza Fiel Garcia started the credit union in 1970 with only 26 members and P200 as initial capital to help employees at the Court of First Instance of Cebu who are victims of loan sharks.

Now, with over 150,ooo members nationwide and more than P15 billion in assets, Moreno said, he could very well relate to the cooperative’s story, stressing that he himself experienced what it was like to be poor.

He said that many lives were changed by the cooperative that is now chaired by former GSIS president Winston Garcia, the brother of Governor Gwendolyn Garcia.

Moreno also said he would continue to court the governor as he hopes to be chosen as the presidential bet for One Cebu party, the ruling local party in Cebu where 3rd district Rep. Pablo John Garcia is the secretary general.

READ: Isko Moreno hoping to be One Cebu’s anointed one

He also expressed his admiration for the Governor because of how she fought for the Cebuanos especially during the pandemic. Moreno said he can very well relate to this because he is also faced with similar challenges as chief executive of Manila.

He then said that there is no point for the other candidates to serve the country if they won’t be doing this for the best interest of the people.

“Itanong ninyo sa sarili niyo itong mga gustong mamuno sa ating bansa, that includes me, nasaan kayo nung oras ng pandemya. Where will you ? Because if you cannot serve us [at] the lowest moment of our lives, then there is no point for you to serve our country. Kung sa COVID takot kayo, eh paano pa kaya yung problema,” said Moreno.

Although Moreno grew up in Tondo, he said that the blood that runs on his veins is a “100 percent Bisaya”, saying that both his parents came from the Visayas, who travelled to Manila in search of opportunities.

Moreno also shared similarities between Cebu and Manila that includes devotion to the Sto. Nino, the patron saint of Tondo.