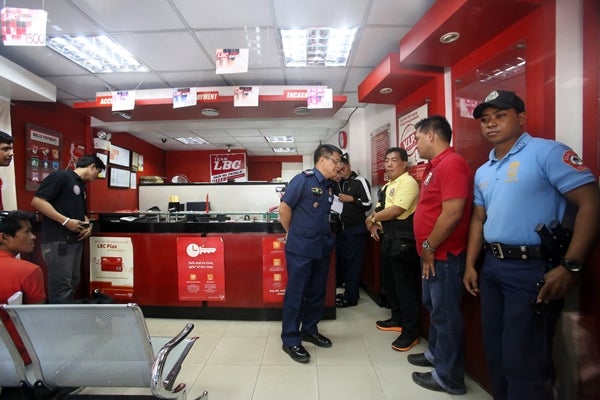 This is the second time the branch was robbed since it opened for business. The shop was held up in November last year.

The LBC outlet in Punta Princesa was the seventh branch to get robbed this year. Just last Aug 14, two men robbed an LBC branch on Escario St. and was followed by another in Aug. 26, with its outlet in barangay Subangdaku, Mandaue City losing P24,000 to two unidentified men.

Like the other outlets, the one on F. Llamas St. does not have a security guard and its closed-circuit television cameras were not functioning.

Senior Supt. Noli Romana, director of the Cebu City Police Office (CCPO), rushed to the area after he learned about the incident that took place past noon.

The robbers pounced on the establishments just as the policeman assigned to patrol the beat had his noon break.

Romana said two female tellers were in the shop when one of the robbers barged in while one stayed outside as a lookout. The third was waiting outside on board a motorcycle.

The first robber asked teller Jeiruewin Ayag how much it would cost to send money to Cagayan de Oro. After Ayag answered his query, he pulled out a gun and declared a holdup.

He ordered Ayag to place the P5,000 cash in a pouch he was bringing.

He and his companions then hurriedly left.

The heist happened quickly and quietly that employees of the adjacent establishments did not notice a commotion.

They just learned about the robbery when responding policemen arrived and inquired about the incident.

Oplan Universe was immediately activated after the incident was reported.

Checkpoints were established but no one was arrested as of yesterday.

The tellers also checked the rogue’s gallery of the police but they failed to identify the robbers.

After the two LBC robberies in August, Romana scheduled to meet with all LBC managers today to discuss security measures to prevent getting robbed but they were overtaken by yesterday’s incident.