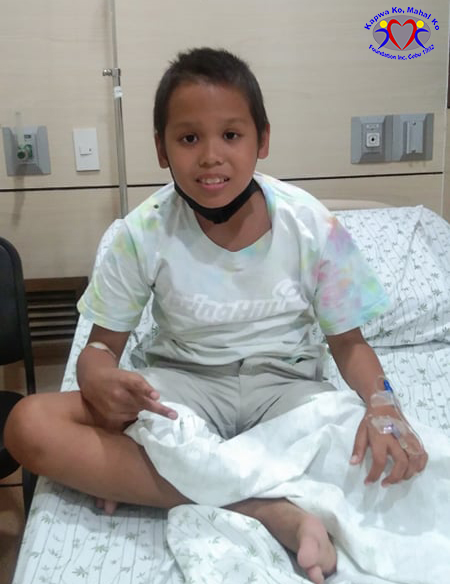 A 12-year-old boy from Brgy. VI (Poblacion), Tuburan, Cebu appeals for urgent financial help for his ongoing fight against cancer.

Mark Croi Oporto was diagnosed with Acute Lymphoblastic Leukemia on February 20, 2021. Four months prior to his diagnosis, the symptoms began. He experienced fever and vomiting. He was then admitted and was treated accordingly. Yet, as the months passed by after his admission, he eventually manifested alarming symptoms like joint pain on his hand, paleness, and body weakness. Because of that, his mother decided to seek for medical interventions. Blood tests and bone marrow aspiration were performed and it confirmed his unexpected diagnosis of Acute Lymphoblastic Leukemia (ALL), a type of cancer of the blood. This frightening disease commonly affects children and is characterized by the increased production of immature lymphocytes by the bone marrow. Because of the advances of medical treatment, there is a high chance of cure for children who are treated promptly with intensive chemotherapy.

Mark Croi’s first dose of chemotherapy was given on March 4, 2021. In order to ensure thorough healing and recovery, his attending hematologist-oncologist prescribed a treatment protocol that usually lasts for three years. Due to his age, he is also classified as a high-risk patient. The long duration of treatment presents a seemingly insurmountable financial challenge and physical burden for the child and his family. At this moment, he is on Reconsolidation phase of his treatment and he needs at least P40,000 every month for his chemotherapy needs which include regular laboratory workups, prescribed medications, and professional fee payment just to name a few. In an unfortunate turn of events, Mark Croi was admitted last October 31 until November 10, 2021 due to infection. The 10-day admission had amounted to P92,126 in hospital bill that produced additional strain to their already depleted finances.

“Kroy-Kroy,” as he is affectionately named by his family, is a good-hearted boy. He is an active lad too as he loves to play basketball. Yet, his lingering illness had made him frail. But despite that, he is very hopeful and determined too. He wants to become a policeman someday. He is the third child of the five siblings in the family. By that, he is immensely loved and valued. His father, a fish vendor, died last year due to heart disease. His father’s untimely death created a deep hole in their family and finances. Filling that void, his mother works doubly hard to support the whole family. She sells fish in their neighbourhood and earns at least P300 every day. This scanty amount is barely enough to sustain the daily needs of their growing family. Because of that, they are in great need financially to carry on Kroy’s chemotherapy treatment. When asked about her wish for her son, his mother replied, “I long for his total healing and to provide for his needs every day.” Hence, in order to save the life of their precious child, his family is sincerely appealing for financial assistance from kind-hearted individuals who like to share their blessings to Kroy and his family.

Thank you very much.

Girl with leukemia pleads for help