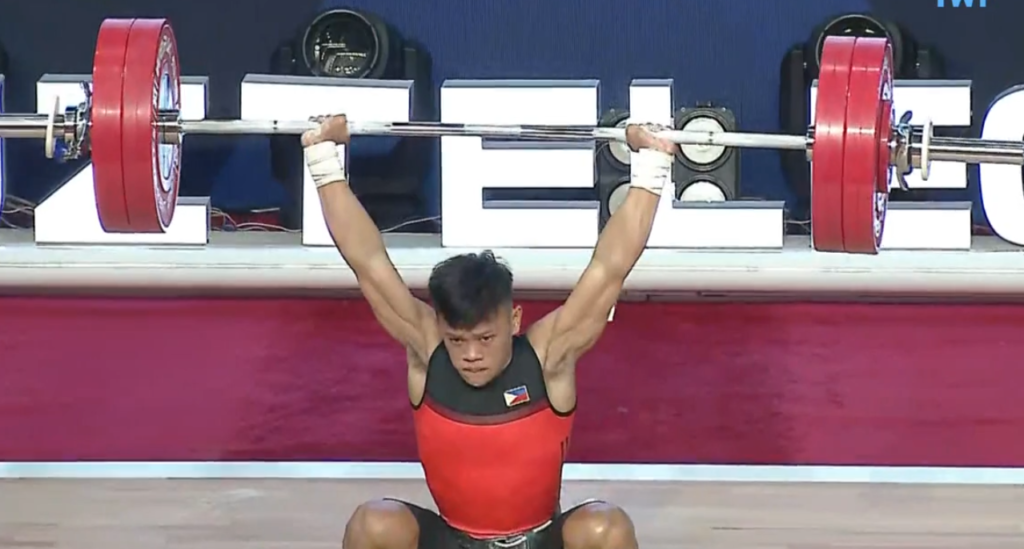 Cebuano weightlifter Fernando Agad made an auspicious debut in the International Weightlifting Federation (IWF) World Championships in Uzbekistan by finishing eighth in his division. | Screen grab from IWF’s livestream

The 19-year old pride of the University of Cebu (UC) lifted a total of 239kgs among 17 competitors in the weight class.

The gold medal went to Kazakhstan’s Arli Chontey, who lifted a total of 260kg, while Thailand’s Thada Somboonuan bagged the silver medal with a 256kg total. Angel Hriskov Rusev of Bulgaria earned the bronze medal with a total lift of 254kg.

Agad finished Group B in second place behind Colombia’s Mesa Suarez, who lifted 242kg. India’s Satrio Nugroho, who has a total lift of 238kg,  came in third.

Agad lifted 108kg in snatch and 131kg in the clean and jerk. He had a fairly good start in the snatch category by successfully lifting 104kg, but he faltered in his second attempt and added 3kg more. He then skipped the 107kg attempt and lifted his best of 108kg.

In the clean and jerk, Agad only lifted 131kg after he failed twice in lifting 136kg.

According to his coach, Ramon Solis of the Samahang Weightlifting ng Pilipinas and the UC Webmasters, he sees a lot of potential for Agad despite being a newbie in international competitions.

Aside from Agad, three more Cebuanos will still be seeing action in the coming days.

Olympian Elreen Ann Ando will debut in the lighter 59kg from 64kg on December 11, along with Dexter Tabique (91kg) and John Febuar Ceniza (61kg).