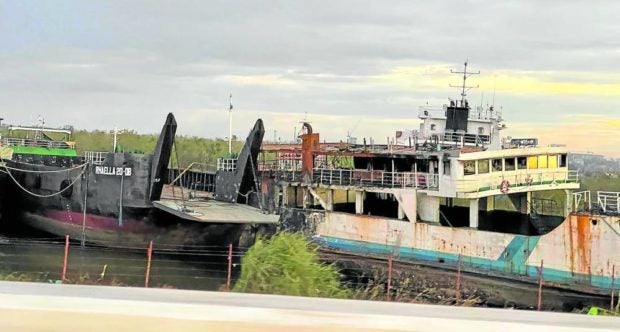 AGROUND Two ships remain side by side on Saturday,more than a week after they ran aground due to powerful winds from Typhoon “Odette” (international name: Rai) on a marshland in Consolacion town, Cebu province. —CONNIE FERNANDEZ-BROJAN

CEBU CITY—The Philippine Coast Guard (PCG) on Saturday said shipowners were working to remove the fuel from their vessels that had either sank or ran aground as Typhoon “Odette” (international name: Rai) barreled across the Visayas last week.

Earlier, the mayors of Mandaue City and Lapu-Lapu City had expressed their concerns to President Duterte about oil leaks from some ships, saying this would harm local tourism.

But a more urgent problem has emerged after the Philippine Coastwise Shipping Association (PCSA) reported that at least 1,000 people who rely on the shipping industry, including seafarers and port workers, were rendered jobless after about 120 vessels owned by members of the group either sank or ran aground during Odette’s onslaught on Dec. 16.

PCSA chair Lucio Lim Jr. told the Inquirer that his group was hoping that the Maritime Industry Authority (Marina) would extend assistance to the shipping industry, which was still reeling from the hard blow dealt by the COVID-19 pandemic when the typhoon came.

“At least 1000 people out of work with more than 100 vessels sunk, damaged, agrounded,” one of Lim’s staff told the Inquirer on Saturday.

The number of ships cited could cripple the shipping industry in the Visayas.

Lim, president and chief executive officer of Lite Shipping Corp., said the delivery of goods to Cebu, including relief supplies, would be delayed after the roll-on,-roll-off (Ro-Ro) and general cargo vessels either sank or ran aground.

Aside from the vessels, ports in Cebu and Bohol were also damaged, the shipowners pointed out.

Lim said some ports could not be accessed because the roads leading to them were blocked by debris.

At Cebu port, some obstructions in the Ro-Ro ramps prevented vessels from docking.

At Pier 2, container vans fell into the water and had to be removed before vessels could dock.

The PCSA, which has more than 50 members with at least 700 vessels, is the largest shipping organization in the country in terms of members and total combined gross tonnage.

Alex Cohon of Lapu-Lapu Shipping Lines, who is also PCSA board member, suggested that government banks extend soft loans so they could have funds to repair the damaged ships.

He said that the industry also suffered when Cebu was hit by Typhoon “Ruping” (Mike) 30 years ago. But the difference before, Cohon said, was that there was no pandemic that severely affected the economy.

“We had money [then]. During COVID, we lost a lot of money. Now this happened,” he told the Inquirer in a phone interview.

“Where will we get the money to repair our ships, to pull out our ships [that ran aground]?” said Cohon, who had three vessels that were stuck on a marshland in Mandaue City.

In a meeting with the President on Thursday, Mandaue City Mayor Jonas Cortes told Mr. Duterte that he was worried about the oil leaking from the sunken ships. Cortes said 58 vessels from the shipyard in nearby Consolacion town were blown toward Mandaue’s mangrove areas during the typhoon, and three had sunk.

One of the ships was at Punta Engaño, a popular tourist destination in Lapu-Lapu, Chan said.

“We get our livelihood from the sea. Once the oil spills out completely, the residents of Lapu-Lapu will lose their livelihood. So apart from what I reported to you earlier that all the pump boats have been wrecked, you add the oil spill to the problem, we will all get crushed,” he told the President.

Mr. Duterte promised assistance, saying the Philippine Navy, and the Department of Environment and Natural Resources, could help clean up the oil spill.

But Capt. Alvin Dagalea, public information officer of the PCG in Central Visayas, on Saturday said only a “minimal” oil spill was detected in the aftermath of the typhoon and this had already been removed.

Spill booms were immediately deployed around the affected vessels while manual scooping was done to collect oil from the water, he said.

“We have already contained it. That was our priority,” Dagalea told Inquirer in a phone interview. “It wasn’t that big.”

He said they had been monitoring these vessels since day one of the typhoon and the shipowners were continuing to siphon the remaining fuel and oil from the ships’ tanks on Saturday.

Lim said the shelters where some of the ships had sought refuge to escape the wrath of the typhoon did not provide enough protection, such as those in Getafe and Loon towns in Bohol, Cansaga Bay in Consolacion, and the Cebu City ports, as Odette’s winds not only topped 200 kilometers per hour but also lingered longer.

By the time the typhoon was over, many vessels had stuck together like in a gridlock in Cansaga Bay off Consolacion, he said.

Some were found in the marshland near the foot of the Cansaga Bridge.

The PCG reported that three vessels also had ran aground in Negros Occidental—two in Bacolod City and one in Sipalay City.

Cohon said the government could also send salvors and tugboats to help them pull out the ships that ran aground.”

“We need help … anything that can help us get us back on our feet,” he said. —WITH REPORTS FROM LEILA B. SALAVERRIA AND CARLA P. GOMEZ

Read Next
Another storm unlikely to hit PH before the year ends, says Pagasa