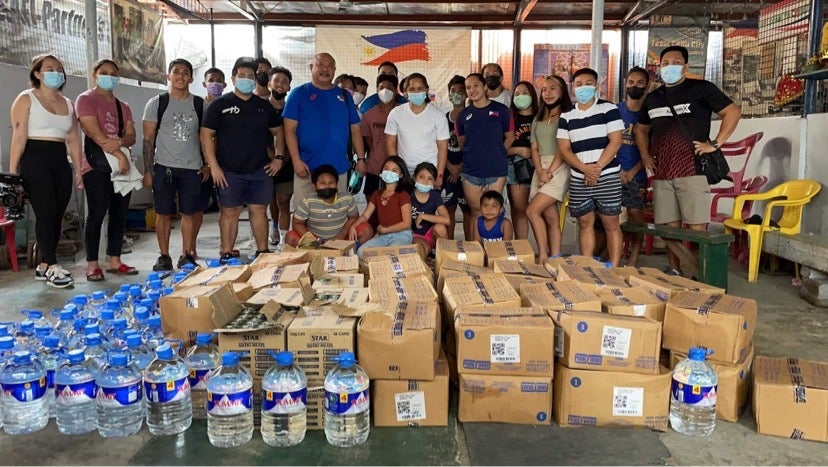 Hidilyn Diaz (middle in white shirt) poses with fellow weightlifters from the Samahang Weightlifters ng Pilipinas (SWP) when she visited them and brought relief goods after Typhoon Odette hit Visayas and Mindanao before Christmas. | Photo from Ando’s Facebook page.

CEBU CITY, Philippines—Olympic weightlifting gold medalist Hidilyn Diaz showed her softer side when she flew to Cebu City to bring relief goods to members of the Samahang Weightlifting ng Pilipinas (SWP) who were affected by the onslaught of super typhoon Odette.

Diaz turned over the goods almost a week since the typhoon hit Cebu and the rest of the Visayas and Mindanao regions on December 16, 2021.

The country’s sports icon was accompanied by Southwestern University-Phinma athletic director Pio Solon, according to weightlifting coach Ramon Solis, who was one of those who received the relief goods.

According to Solis, they were completely surprised with Diaz’s visit as she didn’t announce that she will be visiting them.

Cebuana Olympian weightlifter Elreen Ando was one of those who was greatly thankful for Diaz’s good deed.

Along with Ando who vied during the world championships were her fellow Cebuano weightlifters in John Dexter Tabique, John Febuar Ceniza, and Fernando Agad. They were with their coach Christopher Bureros.

Diaz skipped the world championships after her scheduled training in Malaysia was delayed.

In July, Diaz completed a historic feat as she bagged the country’s first Olympic gold medal in the Tokyo Games. She topped the women’s -55 kilogram division of the women’s weightlifting competition.

READ MORE: No follow up to Olympic gold as Hidilyn Diaz backs out of worlds

Read Next
Ancajas in collision course with fellow Pinoy Bornea