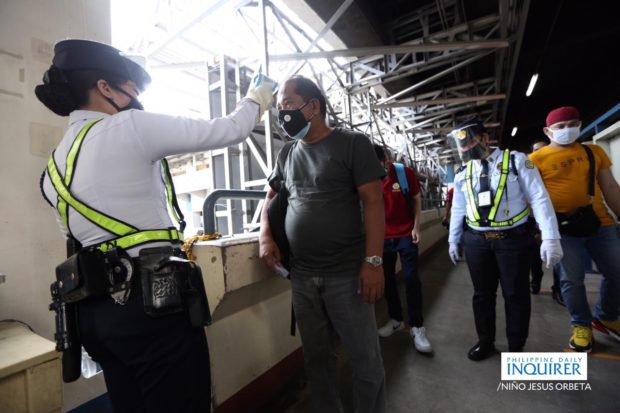 MANILA, Philippines — Malacañang announced that Metro Manila (also known as the National Capital Region)  would be placed under Alert Level 3 from Jan. 3 to 15 after the Department of Health (DOH) warned the public of a “high probability of exponential growth” in COVID-19 infections and the detection of local cases of the more contagious Omicron variant of the coronavirus.

Acting presidential spokesperson Karlo Nograles, who made the New Year’s Eve announcement, said the rest of the country would remain under Alert Level 2.

“The epidemiological investigation on the three local cases indicates there is a high possibility of local transmission,” the DOH said in an early Friday evening statement.

The biggest challenge would be to keep hospitals open “for the sickest patients,” the DOH said, urging Filipinos to avoid harming those at greater risk for getting severe COVID-19.

“In view of this, we request everyone to work together to avoid being unnecessarily admitted and occupying beds that may benefit those who really need it, e.g. with severe/critical symptoms, or children who are not yet eligible for vaccination,” it said.

It urged the public to help by getting vaccinated as soon as possible and boosting personal protection by double masking or pairing a cloth mask with a face shield, avoiding crowded places, isolating early if symptomatic, getting timely COVID-19 tests, and doing teleconsultation from home.

Nograles said at a press briefing that the Inter-Agency Task Force for the Management of Emerging Infectious Diseases (IATF) saw what might be a “big increase in active cases” in the coming days.

“This is the reason why as early as now, the IATF decided to increase the alert level classification of the National Capital Region to Alert Level 3,” Nograles said.

He attributed the increase in cases to holiday activities and reduced compliance with minimum public health standards.

Under alert level 3, permitted establishments would be allowed to operate at 30 percent of indoor capacity for fully vaccinated individuals only, and 50 percent of outdoor capacity.

All employees of these establishments must be fully vaccinated.

Interzonal and intrazonal travel would be allowed, subject to restrictions imposed by local governments.

Gatherings for necrological services, wakes, and inurnments would be allowed.

Those below 18 and those belonging to A vulnerable population would be allowed access to essential goods and services and work in permitted industries.

In-person classes and contact sports would not be allowed.

Gatherings in residences with individuals not belonging to the same household would be barred as well.

The IATF also ordered the drafting of guidelines for stricter measures for those who are unvaccinated against COVID-19 and directed the National Task Force Against COVID-19 to prepare the country’s pediatric healthcare capacity for the expected increase of coronavirus infections and hospitalizations among children given their unvaccinated status, said Nograles, who is also cochair of the IATF.

The last time alert level 3 was raised in Metro Manila was on Oct. 16. It lasted until Nov. 4.

In a televised briefing earlier on Friday, Health Secretary Francisco Duque III said it was prudent to assume that the Omicron variant was already in circulation “for purposes of planning and communication.”

The DOH on Friday reported 2,961 new cases, of which about 99 percent were in Metro Manila.

It was the highest number of daily infections reported in the last two weeks.

The positivity rate, or the percentage of people found positive for COVID-19 out of the total number of people tested, also climbed to 10.3 percent, more than double the World Health Organization’s 5-percent benchmark for an infection to be considered under control

Former National Task Force Against COVID-19 adviser Dr. Tony Leachon believed the increase in COVID-19 cases may be due to a combination of Omicron and Delta variants.

“The rapid spread points to an Omicron variant. Genome sequencing though shows Delta variant’s predominance but we have not tested enough … We don’t know the magnitude of Omicron in the NCR,” he said in a post on Twitter.

According to Dr. Guido David of the independent pandemic monitor OCTA Research, there is a possibility that Omicron has already been spreading in the communities.

“We are not saying we are sure about it, we are just saying there is a possibility and we can’t rule this out,” David said.

The reproduction number—or the average number of infections due to one infected individual—in Metro Manila has risen to 2.19 as of Dec. 27, the highest in the capital region since July 2020, he added.

The Philippine Genome Center has so far detected 14 cases of the Omicron variant since the first case—a traveler from Nigeria—arrived on Nov. 30. There were 11 cases in all that were “imported” and three cases from local transmissions, according to the DOH.

Meanwhile, the number of COVID-19 hospital beds occupied also increased by 16 percent to 1,712, equivalent to a 20-percent occupancy, David said. This is considered very low and way below the threshold level of 70 percent, he added.

The number of COVID-19 ICU beds occupied also rose by 20 percent to 297, or an ICU occupancy rate of 24 percent, also below the threshold level.

The country’s COVID-19 caseload as of Friday was at 2,843,979. This did not include data from two laboratories that did not operate on Dec. 29 and six others that failed to submit their data to the COVID-19 Document Repository System.

Of the 2,961 new infections, Metro Manila accounted for the highest number at 1,981, followed by Calabarzon (Cavite, Laguna, Batangas, Rizal, and Quezon) and Central Luzon.

This latest number was the highest since Nov.1, when the DOH reported 3,117 cases.

There were 132 more fatalities, nine were recorded in December, while the rest were recorded between March 2020 and November this year but were only reported on Friday. The death toll is now at 51,504.

Read Next
Palma to Cebuano faithful: Stand up in faith this 2022