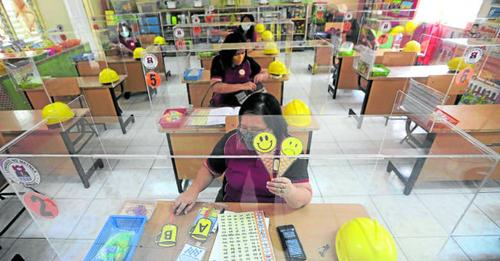 MANILA, Philippines — An ongoing survey for Metro Manila teachers found that 55.4 percent of 8,007 public school teachers are experiencing flu-like symptoms, strengthening the appeal of a teachers’ group for the implementation of a two-week health break in areas on alert level 3.

According to the Alliance of Concerned Teachers (ACT), the most common symptoms experienced by the teachers who responded to the survey were colds, 46.6 percent, and coughs, 44.5 percent.

But despite the high number of respondents who had symptoms of COVID-19, the survey noted that 96.6 percent do not hold a positive test result.

“ACT attributes this to a lack of access to testing and the still low testing capacity of the government,” the group said in a statement on Tuesday.

The group noted that 84.7 percent of the teachers continued teaching and doing other school tasks despite their sickness. Class participation also dropped because many students had the flu.

“As such, ACT is calling on the Department of Education (DepEd) to hold a two-week health break in level 3 areas, which is similar to the number of required days for quarantining positive patients,” the group said.

In the Schools Division Office of Quezon City, based on a quick survey among 64 secondary schools, as of this writing, 10,682 learners said they were sick while 229 indicated that they tested positive for the new coronavirus.

A total of 1,190 students were exposed to COVID-positive patients but had no symptoms while 691 said they were exposed and experienced symptoms.

In the same survey, 1,490 teachers were sick while 41 tested positive for the virus.

“Teachers and students alike are struggling to keep holding classes amid this Omicron-driven surge. Either we’re sick or we’re taking care of family members who are,” ACT said.

At Ernesto Rondon High School, teachers were advised to provide asynchronous activities, use television-based instruction if they could facilitate the online classes or schedule make-up classes.

At Ramon Magsaysay Cubao High School, among the school interventions and modifications implemented were the alternative work arrangements, sending of electronic modules and continuous monitoring via text messaging or chat.

The school also implemented stricter observance of health protocols for those who were reporting onsite and provided free vitamins for the personnel.

Read Next
‘No Vaccination, No Entry’ policy takes effect in Cebu City