Visayan Electric President and Chief Operating Officer Raul Lucero announced that the power distributor has already restored electricity supply to at least 80 percent of customers within its franchise area. As of noon Friday, January 21, it has re-electrified 394,400 out of its 474,182 affected customers.

“We recorded energy demand at 345.3 MW, which is 88% that of the pre-Odette power consumption of 495 MW. It is encouraging to see that power is flowing back into the cities and municipalities that we serve,” Lucero said on Friday.

With this achievement, Visayan Electric is now turning its attention to address pockets within the city that still do not have power, and to expand repair work toward the outskirts of its franchise. 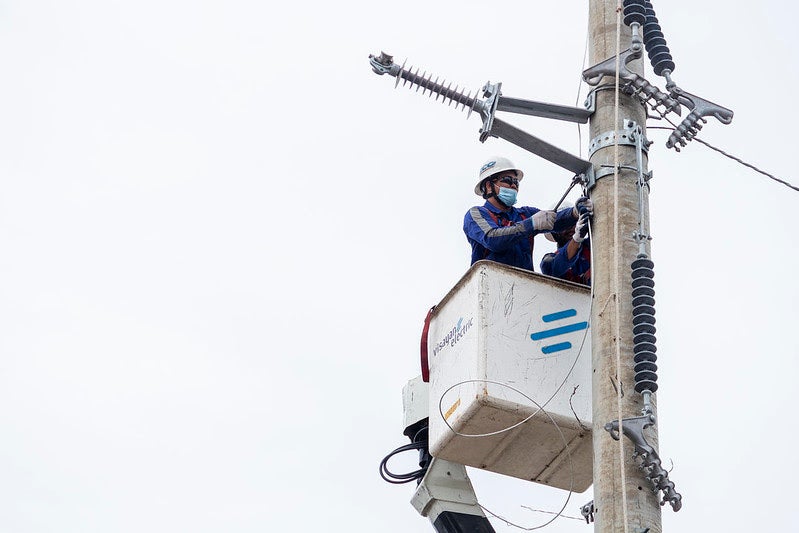 Visayan Electric linemen work on a pole damaged by typhoon Odette. Since the middle of December 2021, linemen organic to the company and from other distribution utilities across the country have been working 24/7 to restore power to Visayan Electric’s franchise area. | Contributed Photo

“We have been getting more help as we progress in our restoration efforts. Twenty linemen from MORE Power, Iloilo City’s electric distribution utility, arrived in Cebu on Monday evening. We are also getting 26 additional people from Luzon who are scheduled to arrive Friday this week,” Lucero said.

All 86 personnel from Meralco will be leaving Visayan Electric starting tomorrow, January 22.

READ MORE: No billing for Dec 17 to Jan 31 for Visayan Electric consumers

33 of them will go to Surigao and Siargao. The other 53 will return to Manila.

“Our linemen continue to work 24/7 to re-energize all cities and municipalities within our franchise area, and so we continue to ask for the public’s patience as we assure them that they have not been abandoned or forgotten,”

Some linemen from other parts of the country are heading back to their original base of operations while others are heading out to places like Surigao to continue their power restoration efforts with other electric cooperatives that badly need help.

Earlier, the utility firm also bought nine bucket trucks to add to its fleet of specialized equipment and is eyeing to purchase five more units. The company official further noted that Visayan Electric is also getting another local engineering contractor for civil works, particularly for pole digging.

As the utility’s linemen have started to target the outskirts of the metro, Lucero urged neighborhoods for their cooperation in bringing equipment to areas not accessible by big trucks.

“Our linemen continue to work 24/7 to re-energize all cities and municipalities within our franchise area, and so we continue to ask for the public’s patience as we assure them that they have not been abandoned or forgotten,” he said.

Given the significant restoration progress it has made in recent days, Visayan Electric continues to invest in more manpower and equipment to restore power to the rest of its franchise area the soonest time possible, with the hardest to reach areas to finally get energized.

“By investing in more resources for our re-electrification efforts and with the invaluable help from local residents, we will get closer to restoring power to all of our customers as our teams venture into the farthest edges of our franchise area,” said Lucero.

“We appreciate the initiative of Visayan Electric to work closely with the City Government of Naga on the re-energization of our puroks and barangays. By joining forces and engaging the help of our community members, we can fast-track the entry of your workforce and materials. We reiterate the commitment of the City Government in this bayanihan effort,” City of Naga Mayor Kristine Vanessa Chiong said.

As the re-electrification efforts continue, Visayan Electric’s restoration teams also continue to discover the greater extent of the damage caused by the typhoon, as evidenced by more than 2,200 damaged poles, four times the 560 damaged poles previously surveyed last December 26. This number continues to rise as the utility further accesses farther-flung areas.

It also restored power to 100% of its substations and around 85% of combined 23KV & 69KV line segments have been energized. All of the 33 hospitals within the Visayan Electric franchise area have been re-energized. For Metro Cebu Water District (MCWD), 98 out of 117 pumping stations (82%) are energized. For Abejo Wells, 19 out of 22 (86%) are already energized.