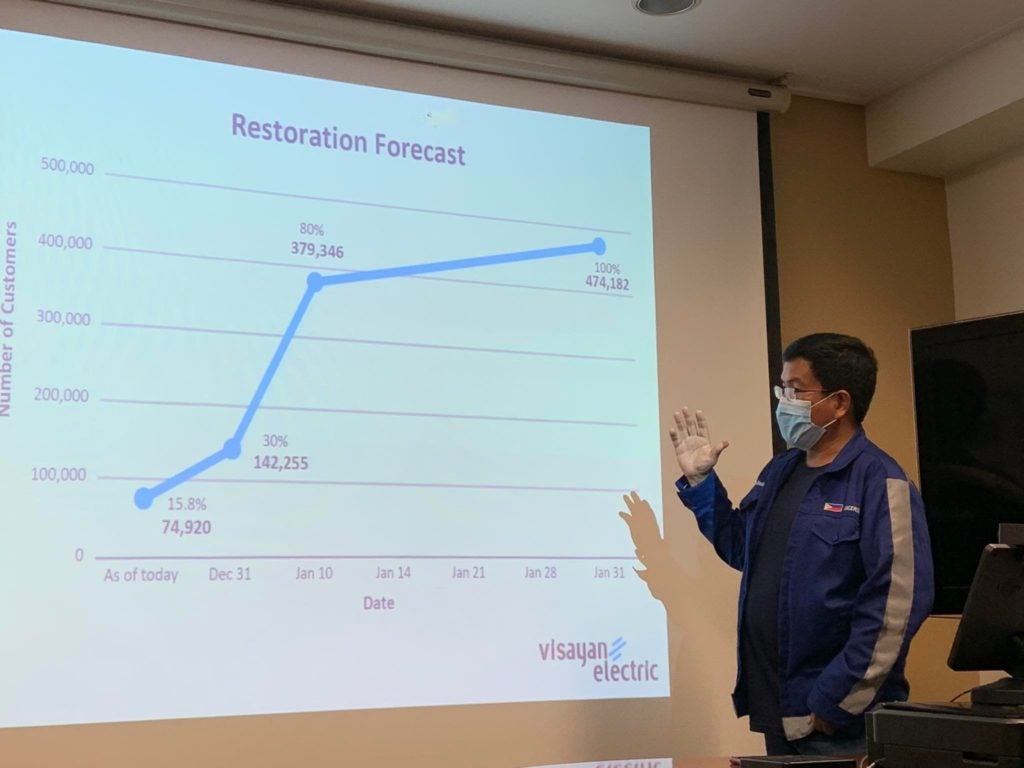 Engineer Raul Lucero, president and COO of Visayan Electric, shows the utility firm’s forecast for the reenergization of its franchise areas. | Delta Letigio

CEBU CITY, Philippines — Consumers of Visayan Electric will not receive a collection bill on January 2022.

Visayan Electric President and Chief Operating Officer (COO), Engineer Raul Lucero, said that this would be a form of reprieve or grace period for all consumers since the electrical line was devastated by Typhoon Odette.

(We have no collection from December 16 to January 31. We will start collections again on February.)

Since the reenergization of the franchise area of the power utility is expected to be fully completed by January 31, 2022, they expect that by February 2022, all consumers will already be served.

If the household or consumer has been reenergized early, their consumption will reflect in the February bill.

(If they got power early, then they should expect a bigger bill on February.)

Visayan Electric is sourcing the funds of its restoration of the franchise area from its previous collections.

Lucero said they could still fund the logistics of the restoration including the food, water, and accommodations of the 725 linemen working on fixing the electric line.

This is why Visayan Electric is appealing to the public not to steal transformers and electric line.

Although they have enough transformers on hand and they can source new ones from sister companies, stolen transformers will mean delayed fixing of a particular post or even an entire line segment.

Lucero appealed to the public to be more patient as Visayan Electric move heaven and earth to being power back to Metro Cebu.

Read Next
No major crime, firecracker-related injury in Talisay, Lapu-Lapu on Christmas Day