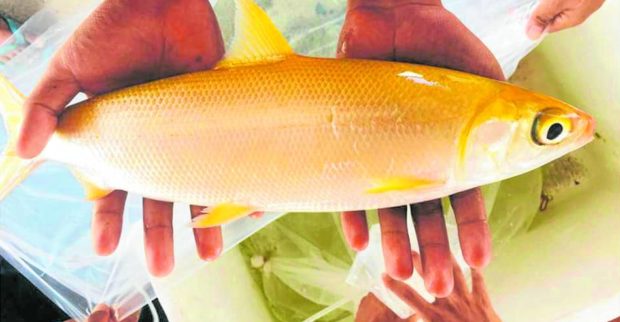 GLEAMING CATCH With its yellow scales, head, fins and tail, this golden “bangus” (milkfish) is an instant attraction at the research center of the Bureau of Fisheries and Aquatic Resources in Dagupan City. It was caught on Thursday at a fish cage in Sto. Tomas town, La Union province. —PHOTO COURTESY OF ROSENDO SO

DAGUPAN CITY—A 700-gram golden bangus (milkfish) has brought excitement to fishery stakeholders in La Union province when it was finally caught in a fish cage in Sto. Tomas town on Thursday.

The fish cage operator harvested the bangus grown under his care, the second attempt to catch it, said Westly Rosario, former chief of the Bureau of Fisheries and Aquatic Resources (BFAR) research center.

“The first attempt last year failed since it was elusive. This time, the operator asked us to come during the harvest since he will donate the golden bangus to BFAR,” Rosario told the Inquirer on Friday.

Rosario said the fish’s golden scales, head, fins and tail are a deviation from the silver bangus and could have been due to albinism or abnormality in its pigmentation.

There is still no scientific intervention to produce a golden bangus, which some people believe brings good luck, he added.

The golden bangus will join a 3-year-old fish of the same color in a pond at the BFAR research center. Both are the only known living golden bangus documented in the country.

Last year, another golden bangus was kept at the BFAR’s pond but eventually died.

Rosario said the BFAR hoped to breed the rare bangus species but it would take about four more years before the new one, which is about a year old, will sexually mature.

He said they were still uncertain if the new pair would breed as “we don’t know if they are male or female.”

“And if they breed, we’re not sure whether they will produce golden ones,” Rosario added.

Rosario said a golden bangus is a rare variety. The first seen in Pangasinan in 2012 died after two months probably due to stress after visitors took turns in taking photos of the fish. The fish’s death could also be due to the size of the pond, which was then 150 square meters and too small for the golden bangus, he added.

Although the pair of the golden bangus has been attracting attention in La Union, BFAR personnel have prohibited anyone from going near the larger pond, which is now 1,500 sqm, to avoid causing them stress.

Read Next
IC3 will no longer be an isolation center