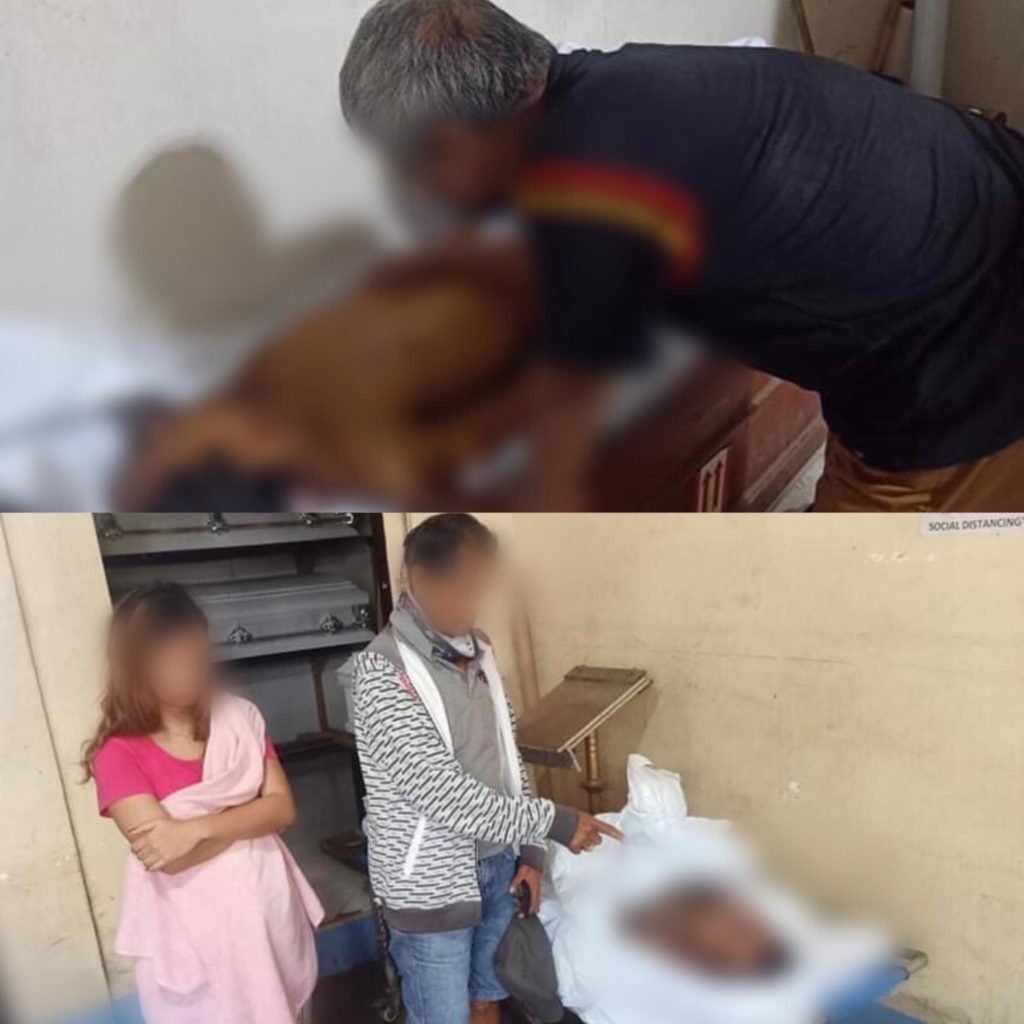 The father of Eric Amigable, 34, (upper photo), and family members of Harrold Bejasa, 32, (bottom), positively identify the two a few hours after they were found dead by a farmer in barangay Kawasan in Aloguinsan town around 7 am on January 20, 2022. | Photos courtesy of Aloguinsan Police Station

CEBU CITY, Philippines — The Aloguinsan municipal police continue to coordinate with their counterparts from Cebu City in verifying the alleged involvement in illegal drugs of the two men from the city whose bodies were found in the town on Thursday morning, January 20, 2022.

The two were found dumped in the town’s canal with gunshot wounds in different parts of their bodies.

According to their initial investigation, Barnido said they found out on Friday, January 21, through data from the Carbon police, that Bejasa, in a spot report recorded last July 2, 2016, in Carbon Police Station, was previously arrested for murder and frustrated murder.

The warrants of arrest were issued by Hon. Ricky Jones Macabaya, the presiding judge of the Regional Trial Court 7, Branch 5 in Cebu City.

Barnido said that they are still looking into the two cases after Bejasa’s father claimed that these were already dismissed and that the victim was released from jail in 2017.

Barnido said they also received a record from Carbon police which stated that Bejasa was also included in the barangay’s drugs watch list and in the link diagram of the police for his alleged involvement with drug personalities.

According to Barnido, Bejasa was also tagged as the ‘hitman’ of slain drug personality Rowen Secretaria alyas ‘Yawa’ who was killed in 2016.

Aloguinsan police also went to the Ermita barangay hall on Friday, January 21, to gather more information on Bejasa’s alleged involvement in illegal drugs. Based on the statement of Mark Miral, barangay chairman, they knew Bejasa and his reported involvement in illegal drugs before but the victim reportedly surrendered under the Oplan Tokhang program, which rolled out after President Rodrigo Duterte became president in June 2016.

Barnido also revealed that the barangay received complaints in December last year about Bejasa brandishing a firearm. However, no reports on the incident were logged.

Barnido also said that they also visited Sambag 1 and Inayawan on Friday afternoon, January 21 to inquire about Amigable’s background.

Amigable, accordingly, was not included in the barangay’s drug watch list as confirmed by the barangay’s secretary. However,  an active member of the village, whom police did not identify for security purposes, told police that he reportedly monitored the recent activities of Amigable on illegal drugs in barangays Sambag 1 and Calamba.

According to this informant, Amigable was once seen with Bejasa distributing illegal items on board a motorcycle. Said informant further disclosed that there could be a chance that the two might have failed to remit the earnings of their illegal transactions which possibly cost their lives.

Barnido, however, said that the said information is still subject to verification.

Barnido added that Amigable was arrested for violation of Presidential Decree 1602 (hantak) last December 16, 2021, but was released following an order that his case is raffled under regular preliminary investigation.

During the tactical interrogation of the police, Amigable admitted that he was a drug pusher and, at the same time, a user..

Prior to the incident

Barnido said that the two were found dead on Thursday morning, January 20,  along the highway in barangay Kawasan in Aloguinsan town. Their bodies were discovered by a farmer who was supposed to pasture his cow nearby. Police identify the farmer as a certain Virgilio Navaja, who usually pastures his cow in the said area.

Barnido said that the two were possibly killed in the area not long before their bodies were found. Residents living nearby claimed that they heard a burst of gunfire on Wednesday night, January 19. Police also found fired cartridges in the area.

Barnido said that based on their initial investigation, Bejasa went to Barangay Mambaling on Wednesday, January 19 with his girlfriend. At 2 pm on the same day, Bejasa told his live-in partner that he will leave ahead of her because he will go to a friend’s house. The police are still trying to establish the identity of the friend.

Barnido said that was the last time that Bejasa was seen alive.

The bodies of Bejasa and Amigable were positively identified by their respective families.  /rcg