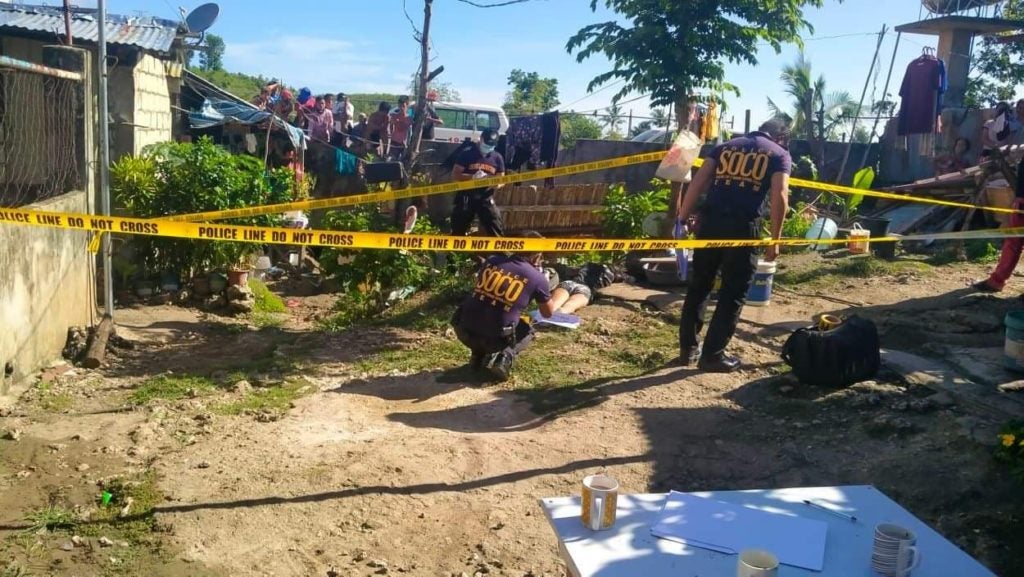 Scene of the Crime Operatives process the crime scene where Nina Cadungog, a housewife, was shot dead by her neighbor this morning, March 14, in Barangay Canamucan, Compostela town, in northern Cebu. | Photo courtesy of Compostela Police via Paul Lauro

CEBU CITY, Philippines — An argument or a quarrel over a pot of plant placed at the side of the road in Compostela town in northern Cebu on March 14 ended in the killing of a 39-year-old housewife, the arrest of the victim’s neighbor’s wife, and a police manhunt of the suspected killer, the victim’s neighbor’s husband, who remains at large as of this posting.

Police Lieutenant Samuel Negro, Compostela Police Station chief, said that the victim, Nina Cadungog, was washing clothes at the front of her house in Barangay Canamucan in this northern Cebu town after she argued with her neighbor’s wife, Madelyn Ternate.

(They argued over the road. The victim had allegedly placed a pot of plant on the road leading to their houses. And this caused difficulty for neighbor’s husband to pass the road as plant was partially blocking the road. So this started the argument between the victim and the neighbor’s wife, Madelyn.)

Negro said that Anthony Ternate, Madelyn’s husband, allegedly went inside after the wives’ argument and came out with a gun.

The Compostela Police Chief said that Anthony Ternate then approached Cadungog and shot her dead.

Witnesses later told police that it was Anthony Ternate, who killed Cadungog.

Negro said that they were also arresting Madelyn Ternate as an accessory to the crime, considering that she started the argument, and she did not stop her husband from shooting to death Cadungog.

He said that murder complaints would be filed against the suspects — Madelyn and Anthony Ternate.

([They will be facing] Murder [complaint]. Yes, the two of them. We are considering the wife because she started this all. Then there is superior strength. The elements that we saw that she did not advised her husband “not to do it”.)

(She did not have a warning or word against the killing of her neighbor. That she did not want that thing to happen, but there was nothing. So we considered her as an accessory to the crime.)

Negro also said that they were still conducting a hot pursuit operation in locating Anthony while his wife was detained at Compostela police station.