Phivolcs: No tsunami threat to PH after magnitude 7.3 Japan earthquake 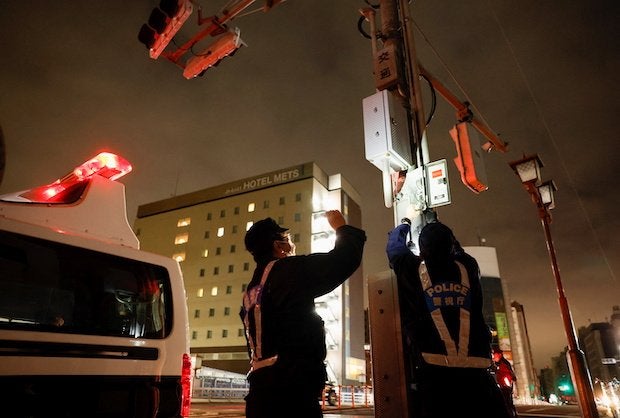 Police officers try to restart traffic signals by attaching electric generator during an electric stoppage at the area after an earthquake in Tokyo, Japan March 17, 2022. (REUTERS)

MANILA, Philippines — There is no tsunami threat or warning in the Philippines following a  magnitude 7.3 earthquake that jolted Japan’s northeast coast off Fukushima, according to the Philippine Institute of Volcanology and Seismology (Phivolcs).

Phivolcs, in an advisory on Wednesday night, said hazardous tsunami waves are possible for coasts near the earthquake’s epicenter.

ADVISORY: NO TSUNAMI THREAT TO THE PHILIPPINES

“Hazardous tsunami waves are possible for coasts located within 300 km of the earthquake epicenter. This is for information purposes only and there is no tsunami threat to the Philippines from this earthquake,” said Phivolcs.

According to the Japan Meteorological Agency, the earthquake struck off the coast of Fukushima prefecture at a depth of 60 kilometers on Wednesday, leaving one dead and 69 injured.

Read Next
An obsolete normal