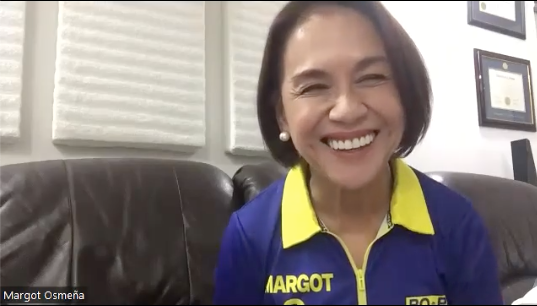 She said that her husband, former mayor, Tomas “Tommy O” Osmeña, has been supportive of the BPO industry and dreamed of a BPO City where government services could run 24/7 to cater to the needs of both day shift and night shift workers.

In a forum with the Cebu Information Technology and Business Process Management Organization (CIBO), Osmeña said that there are many ways the city government can help the industry should she be given a chance to serve.

For one, the Typhoon Odette has brought to light the concerns of disaster preparedness and how it affects the billion-peso BPO industry.

“The first thing we should do is to prepare. We don’t wait until the disaster strikes. When it strikes already, people should know who to call, what to do. A command center, that’s very clear to all. What happened in Odette was that there was no sign of anything happening at least for a few days. You didn’t see any movement at all,” said Margot O.

The mayoral candidate also notes that a leader’s presence during a disaster is a necessity for the public. There should be clearly defined leadership.

The typhoon also brought to light the problems of power and connectivity. Among these is the spaghetti wires that have caused problems to the connectivity and power during the storm.

Margot O said she knows that the wires have to go, probably underground, but she also understands that it will have to come in phases.

“I don’t have a definite answer, I have to be truthful. All I know is that they have to go and when they have to go, it has to go by phase… I will rely on the advice of those who are experts on that field,” she said.

As for the pressing issue of BPO workers being demanded to go back to work on-site set-up after two years of working from home, Margot O said this was an issue only the national government can solve and begged off from further comments.

The aspiring mayor assured the BPO industry that should she win, the city government will provide the necessary resources to BPO workers to thrive whether they may be day shift or night shift.

She said that her husband, Tommy O, has many dreams for the growing BPO industry and she will carry on these dreams to her term should she be given the chance to.

For Margot O, growing the BPO industry is one of the keys to growing Cebu City’s economy and she promised that if she becomes the first woman mayor of the city, the industry will find greater heights to soar.         /rcg

A4 priority group expands to BPO, Comelec frontliners for vaccination

Read Next
Up next for Mandaue: Face-to-face graduation