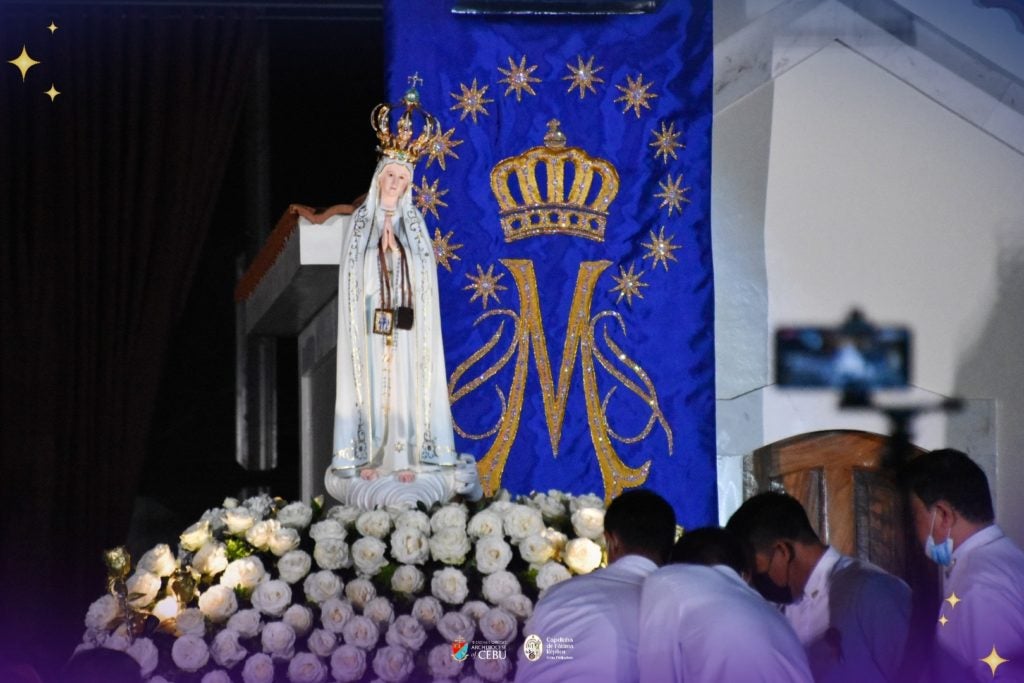 An overnight vigil was held at the Capelinha (Little Chapel) in San Remegio town in northern Cebu, Sunday night, April 3.
Palo Archbishop John Du later on crowned the image of the blessed Virgin Mary. Rev. Fr. Crescenciano Ubod placed a rosary on the image while Msgr. Roger Fuentes placed a scapular. A short procession was then held to bring the image inside the Capelinha for its official enthronement as devotees lighted candles. | Photo courtesy of the Roman Catholic Archdiocese of Cebu

This after the Roman Catholic Church here led the blessing and consecration of the chapel in San Remigio town, northern Cebu on Monday dawn, April 4.

More than 6,000 pilgrims and church officials, both local and international, joined the religious event in Barangay Lambusan, according to the Archdiocese of Cebu.

These included priests and officials from Portugal, where the Sanctuary of Our Lady of Fatima is located, such as Rev. Fr. Francisco Pereira, chaplain of the Santuário de Fátima in Portugal, and Nuno Prazeres Executive Director of the World Apostolate Fatima (WAF) and International Secretariat of the Domus Pacis, Fatima, also in Portugal.

In his homily during Monday’s Mass, Cebu Archbishop Jose Palma said the island province is lucky to have been chosen as the site for the world’s fourth replica of the Capelinha de Fatima.

“We are indeed privileged to gather and give thanks and to praise God for the marvels of His love,” said Palma.

He also thanked the devotees who attended the ceremony, and those who stayed overnight to participate in the vigils prior to Monday’s consecration.

“Today, in a very special way, we thank the Lord for the gift of Mama Mary. We thank the Lord because we know Mary is the mother of Jesus and yet she is our mother, too,” Palma said.

“We know we have come to consecrate this chapel, to consecrate ourselves and pledge to follow the word of a mother who loves us and makes sacrifices for us,” he added.

The prelate, in turn, reminded faithfuls to be grateful to God for having Mary as their mother.

The newest pilgrimage site in Cebu began its construction in late 2020. The church and private citizens poured a total of P35 million into it.

Palma also expressed gratitude for the people behind the project.

“Even as we thank Mama Mary, we thank the many who are instruments in the realization of these dreams for us… We thank the thousands of people building the Capelinha out of love for Mama Mary, and out of the generosity of their hearts,” he said.