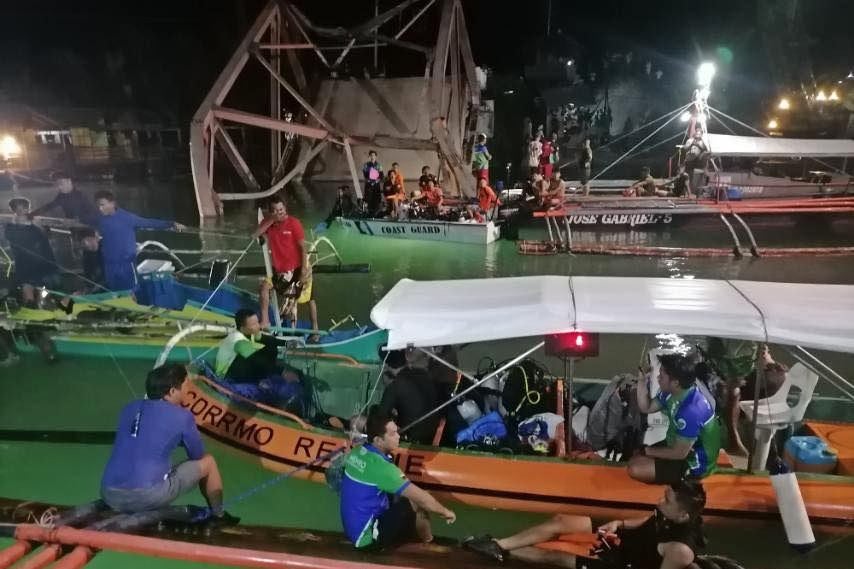 Search and retrieval operations were conducted at the collapsed Clarin Bridge in Loay town, Bohol on Wednesday, April 27, 2022. | Photo courtesy of the Philippine Coast Guard

CEBU CITY, Philippines – Investigation is still ongoing to determine the root cause of the collapse of the old Clarin Bridge in Loay town, Bohol, which resulted in the death of four individuals, including a foreign tourist, last Wednesday, April 27, 2022.

But according to the Provincial Government of Bohol, citing initial reports from the Department of Public Works and Highways (DPWH), the bridge may have crumbled due to ‘overloading.’

“According to Engr. Magiting Cruz of the DPWH, the possible cause why the bridge collapsed was because the bridge is only for flowing traffic. Ang nahitabo kay na stationary ang traffic,” said Bohol Gov. Art Yap in a video message.

“And there were a lot of vehicles on the bridge and the bridge could not take the weight. That’s the reason why it collapsed,” he added.

Latest report from the local government of Bohol and Loay town showed that a total of 12 vehicles were found submerged underwater after the Clarin Bridge collapsed around 4:10 p.m. on Wednesday.

Of the 12 vehicles underwater, six happened to be four-wheeled cars, one dump truck, three tricycles, and two motorcycles.

In a more recent interview, Yap and Loay Mayor, Atty. Hilario Ayuban, said they have already shifted to search and retrieval operations around 8 p.m. on Wednesday, but it was temporarily halted around 11 p.m. to ensure the rescuers’ safety.

“On our third dive, around 8:30 p.m, we have around 10 to 15 divers who participated but a few minutes ago they finished, terminating all operations because of the strong rain, and water’s too murky, and the current too strong,” explained Yap.

So far, divers and rescuers have not found any bodies trapped in the submerged vehicles and within the close proximity of the collapsed site, said Ayuban.

In the meantime, authorities already identified the casualties and survivors of the tragedy.

At least four individuals, including an Austrian tourist, died. They were rushed to the nearest hospital but attending physicians declared them dead on arrival.

They are Michael Ouschan, from Austria; Arnes Silos from Dauis in Bohol; Emilia Gemina from Villalimpia in Bohol, and Epifania Oñada from Tagbilaran City, the province’s capital.

Yap said they have already informed the Austrian Embassy in Manila about the death of one of their citizens.

“We have contacted the Austrian Embassy about repatriating his remains,” Yap said.

The governor also vowed that the provincial government and local government of Loay will be extending support, in-kind and financial, to the victims and survivors of the tragedy.