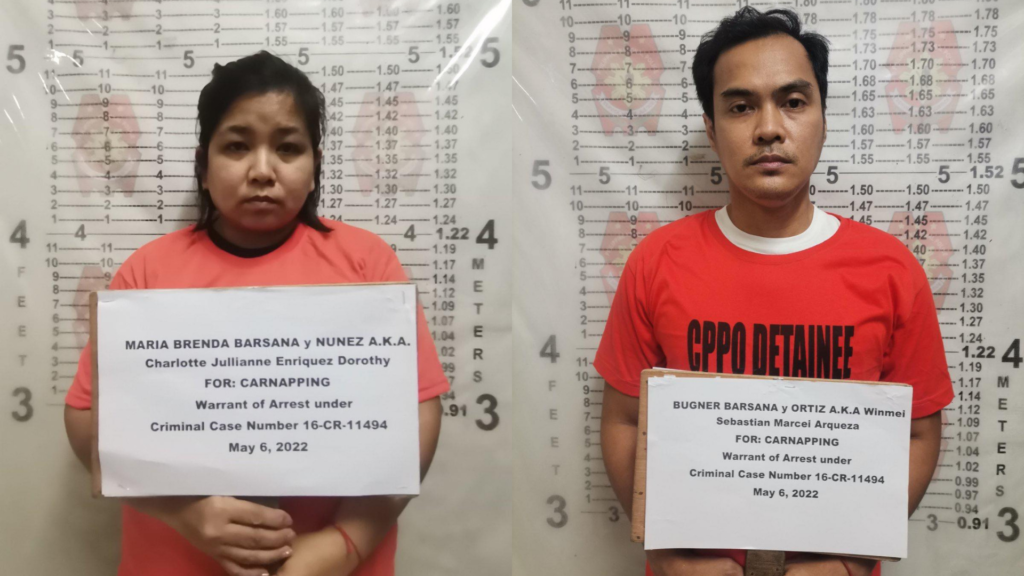 A couple was arrested in Cebu City on May 6, 2022, for large-scale estafa and carnapping.

CEBU CITY, Philippines — The police are urging the public to visit the Cebu Police Provincial Office in Sudlon, Barangay Lahug. to lodge a formal complaint if they have been victimized by a couple from Manila who was arrested in Cebu City on May 6, for estafa and carnapping charges.

After a week of arriving in Cebu, provincial police were able to serve three warrants of arrest against Maria Brenda Barsana and Bugner Barsana, inside a lodge in Cebu City where they are temporarily resting, said Police Lieutenant Colonel Mark Gifter Sucalit, deputy provincial director for operations of CPPO.

According to Sucalit, the arrest was made after a reliable source tipped them off that the two were in the lodge after at least ten years in hiding.

“We have arrested an elusive couple, this big-time swindler and ‘carnapper’ operating in the whole country,” Sucalit said.

Among the areas, they are operating include Baguio City, Palawan, some areas in Visayas, and Mindanao, including Misamis Occidental, Camiguin, and also in Pangasinan, and places in the National Capital Region.

Based on their investigation, Sucalit said this couple would befriend a person whom they profiled as rich. When a connection would be established, they will propose a business and will immediately disappear when the proposal has been consummated. Sucalit said the amount would usually involve millions.

According to the information they received, police estimated that the couple swindled from P50 million to P100 million from different victims. He said the suspects would use documents with fictitious names.

Sucalit said the suspects operate nationwide for about 11 years already. He added that some victims even reported this to the National Bureau of Investigation and at the national headquarters in Camp Crame.

Aside from that, Sucalit said the two were also involved in carnapping incidents nationwide. The accused allegedly would rent cars and would never return these to the victims.

Sucalit added that the couple is leading a group of swindlers. For now, the police continue to investigate the identities of their possible cohorts.

Sucalit is advising the public to visit their office and check if the arrested suspects were the ones who deceived them.

The suspects for their part belied the accusations.