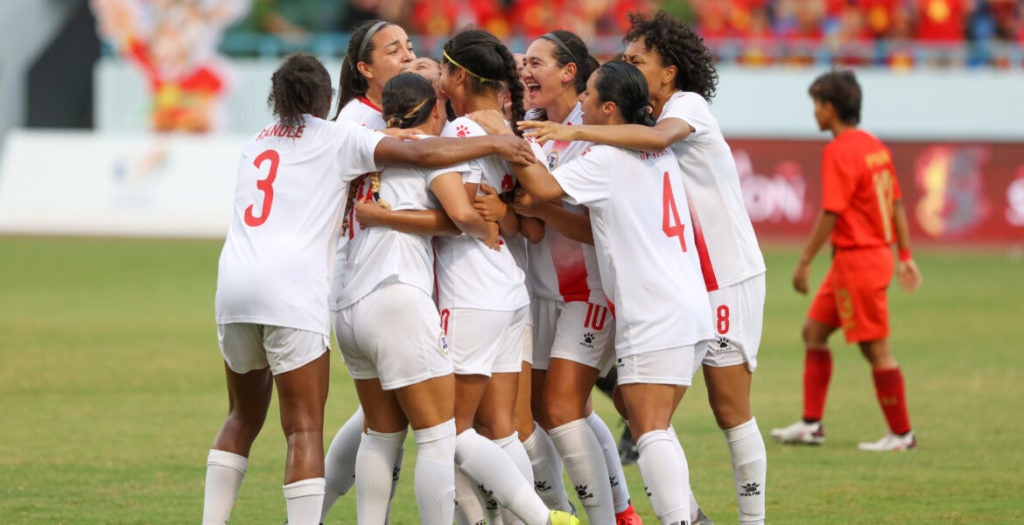 The Philippine Women’s National Football Team (PWNFT) celebrate after scoring a goal in their bronze medal match versus Myanmar in the 31st SEA Games in Vietnam. | Photo from PFF Website.

After qualifying for the first time for the FIFA Women’s World Cup next year, the Pinay booters on Saturday, May 21, also ended the country’s 37-year medal drought in the Southeast Asian Games (SEAG) by bagging a bronze medal in Vietnam.

The Filipinas however, have to get through stubborn Myanmar in a come-from-behind fashion, 2-1, courtesy of Sarina Bolden and Quinley Quezada’s goals.

Those precious conversions gave the Philippines its first medal in the event since 1985.

Win Theigi Tun of Myanmar scored the first goal via a penalty kick in the 23rd minute after getting fouled by Hali Long inside the penalty box.

The Filipinas and Burmese fought tooth and nail until the halftime break with Myanmar still up, 1-0.

However, in the second half, Carleigh Frilles intercepted the ball from the Burmese’s possession and passed it directly to Bolden.

Bolden then eluded the defense for a breakaway and drove the ball to Myanmar’s goal.

The ball was initially caught by Myanmar’s goalkeeper but it slipped through her hands and went straight into the net for the equalizer in the 73rd minute.

Bolden again was instrumental in the Filipinas’ second goal with her timely lob to Quezada who maneuvered the ball past Myanmar’s defenders and goalkeeper giving the Filipinas a 2-1 advantage which they protected until the final whistle.

The  Stajcic credited his team’s historic feat in the SEA Games.

“It was the best performance we had in this tournament,” said Stajcic. “We showed amazing heart and spirit to the death to get the win. It was a performance to be proud of,” said head coach Alen Stajcic in a post on the PFF website.

Stajcic said their SEAG bronze is just the beginning for the team that will be vying in the AFF Women’s Championship this July, and next year’s 2023 FIFA Women’s World Cup in Australia and New Zealand.

“We look at this as our first medal in the SEA Games as a big achievement for the group. We are a new team playing at this level and competing against Vietnam, Thailand, and Myanmar so we’re going to have ups and downs,” added Stajcic.

“We still have a long way to go and get to their level but tonight we showed we can compete with these 3 teams in Southeast Asia and if we keep on improving, next time I’ll expect a better medal.”

The Filipinas had a 2-2 (win-loss) record in their SEA Games campaign. They opened with a 5-0 victory against Cambodia but lost to the host team, Vietnam, 1-2, and Thailand, 0-3, before beating Myanmar in the bronze medal match.     /rcg