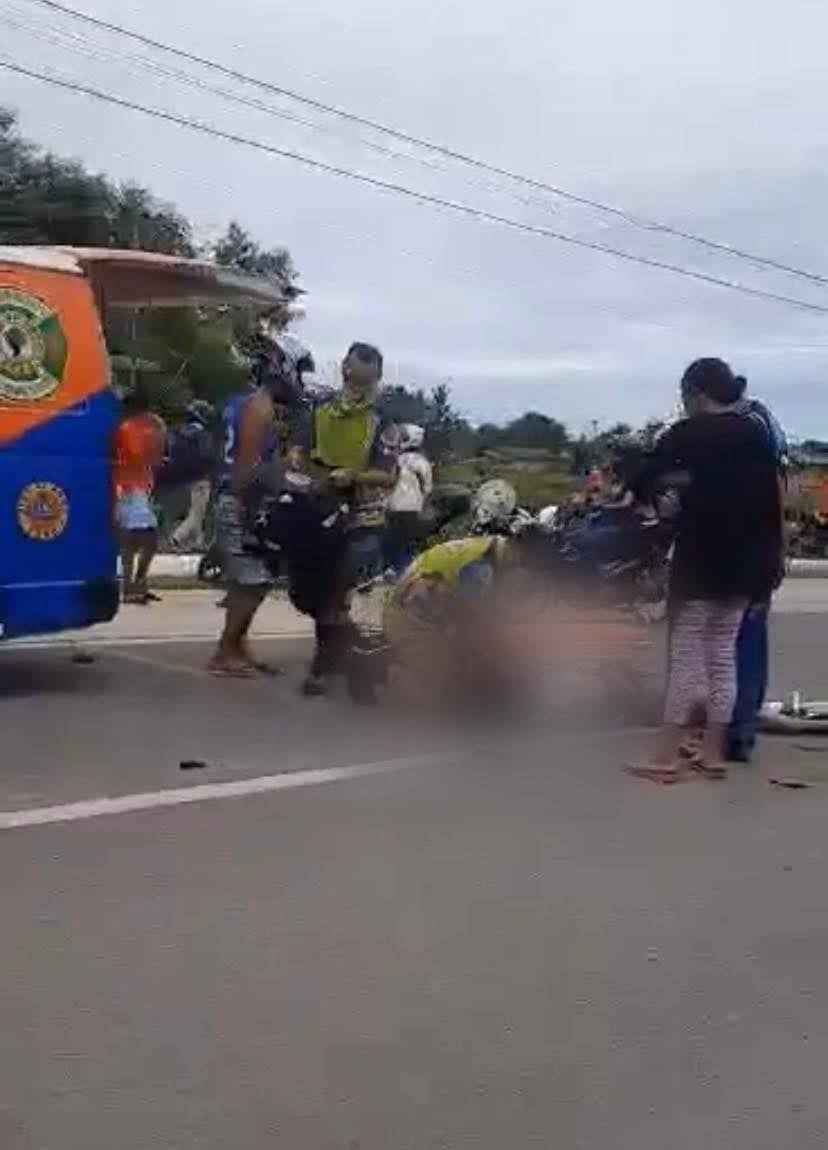 Paramedics attend to one of the injured in the collision of two motorcycles in Bogo City this afternoon, May 30. | Contributed photo

CEBU CITY, Philippines — Three people died while seven others were injured in two separate motorcycle collisions along the national highway of Barili town in southwestern Cebu and Bogo City in northern Cebu in the past two days.

The latest accident happened at past 3 p.m. today, May 30, in Bogo City where a couple, their three children, including a 10-month old baby, were injured after their motorcycle collided with another motorcycle as they were cruising along the national highway Barangay Dakit, Bogo City.

The driver of the other motorcycle, Frits Corvo, 19, a student from Barangay Tacup, San Remigio town in northern Cebu, was also injured in the collision.

According to Police Staff Sergeant Riche Comendador, traffic investigator of Bogo City Police Station, the accident happened after Rodito Lauron Jr., 33, the head of the family of 5, dozed off while they were cruising along Barangay Dakit, Bogo City.

At that time, the family was on their way to a church in Bogo City from their home in Sogod town in northern Cebu to light candles, a few days after the city’s May 27 fiesta.

Lauron, his wife, his three children and the other driver, Corvo, were admitted at the Cebu Provincial Hospital in Bogo City, where they were treated of their injuries.

Bogo City is a coastal component city of Cebu Province. It is located 97 kilometers north of Cebu City.

On Sunday, May 29, at past 2 a.m. in Barangay Tubod in Barili town, a collision between two motorcycles left three people dead and another one seriously injured.

Villadar said that both minors were backriders of Junmar Salmeron, 24, who had just came from a benefit dance in a neighboring barangay.

The other motorcycle was driven by Emilito Empleo, 38, whose motorcycle was loaded with a sack of firewood and he was headed to Barangay Mantalongon of the town.

Both were cruising along the national highway in Barangay Tubod, Barili town and they were on opposite lanes.

Salmeron, with his two backriders, who were heading home to Barangay Nasipit from Barangay Malolos, were on the left lane while Empleo, who was heading to Barangay Mantalongon was traversing the right lane.

When suddenly, Salmeron lost control of his motorcycle, which swerved to the left, and collided with the motorcycle that Empleo was driving at the right lane.

Salmeron, the 17-year-old boy, and Empleo died in the collision. The 17-year-old girl was rushed to the Barili District Hospital for treatment.

Villadar said that a witness told police that Salmeron was driving at a high speed when he lost control of his motorcycle.

Barili is a second class municipality of the province of Cebu, which is located 55 kilometers southwest of Cebu City.