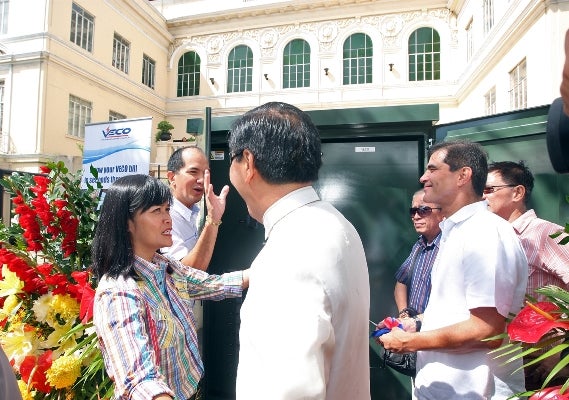 The P70-million project, according to Veco president Jaime Jose Aboitiz, is part of Phase One of the project which will cover N. Escario Street to P. del Rosario Street.

“The second phase which we will do next year, will cover the second part of Phase one which is from Fuente Osmeña Circle to P. del Rosario,” said Aboitiz.

Lacson added that the UDS project eliminates outages in the network caused by vegetation and reduces operational expenses when trimming trees near power lines.

Aboitiz said they plan to do the project every year until all major thoroughfares within their franchise area are covered, Aboitiz said they allocate an annual capital expenditure of P70 million to P100 million.

He added they will be prioritizing the areas that are usually covered in the Sinulog route which includes Mango Avenue and other streets that have a high concentration of establishments.

The project cost will later be recovered by Veco, based on Energy Regulatory Commission (ERC) rules.
“Maybe in three years time but the cost is very minimal, maybe only about one centavo per kilowatt hour,” Lacson said.

Veco’s franchise area covers Liloan in the north down to San Fernando in the south serving about 370,000 customers.

The project was initially created to comply with the provisions of Cebu City’s Ordinance 1894 which sought to create a power distribution system that is aesthetically pleasing to city residents.

In 2013 the Beautiful Cebu Movement Foundation, Inc. endorsed the UDS since it complements the city’s Osmeña Boulevard restoration and beautification project.

Rama, who celebrated his birthday yesterday said he has a soft spot for the project since it is his goal to beautify the sidewalks of Cebu.

“Since VECO has already started, other telcos don’t have a choice (but to follow). Let’s just take it step by step,” Rama said.

The mayor said the project is good for both safety and aesthetic purposes.

In an executive session last month, the Cebu City Council requested City Engineer Jose Marie Poblete to check with other utilities and telcos that would want to follow Veco in transferring their overhead wires underground.

This came after Poblete revealed that the Department of Engineering and Public Works (DEPW) still hasn’t formed the Utility Lines Installation Coordinating Committee (ULICC), which is required under City Ordinance 1984.

The ordinance aims to “regulate a utility set up that will be safe, secure and aesthetically pleasing for the Cebu City Constituents.”

Poblete said there is currently a standstill on requiring utilities and telcos to go underground.

“The rest of the telcos need approval from their central office in Manila. We can’t force it yet. What we can do is remind them that there is this ordinance and that they have to follow suit. We are also being considerate on the huge cost that is involved in this projects,” he said.

He encouraged other companies to come up with a cooperation agreement with Veco in going underground, since they already started.

The DEPW is still reviewing the project before they can grant an excavation permit for the project.

According to Engr. Dodong Cruz of PLDT, the P6 million project has already been approved in their Manila office and will cover all cable wires on both sides of Osmeña Boulevard from Capitol to the Fuente Osmeña rotunda.