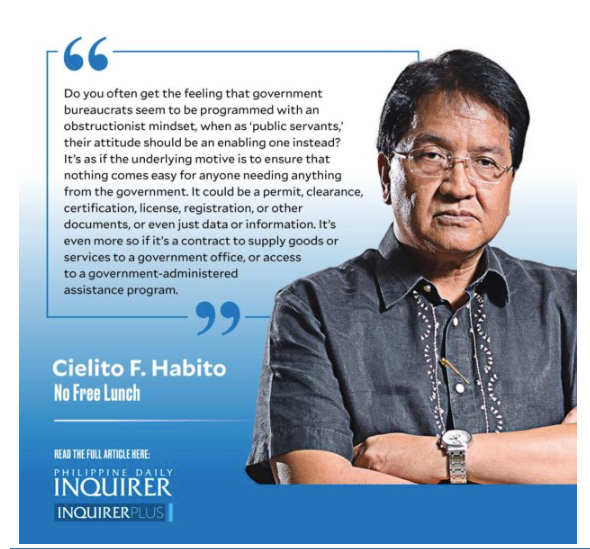 Do you often get the feeling that government bureaucrats seem to be programmed with an obstructionist mindset, when as “public servants,” their attitude should be an enabling one instead? Over the years, I’ve shared many anecdotes on how government offices can be so creative in finding ways to seemingly make things as hard as possible for their client publics. It’s as if the underlying motive is to ensure that nothing comes easy for anyone needing anything from the government. It could be a permit, clearance, certification, license, registration, or other documents, or even just data or information. It’s even more so if it’s a contract to supply goods or services to a government office, or access to a government-administered assistance program.

I’ve had too many direct experiences and heard too many “sob stories” from relatives, friends, and readers on travails in transacting with a government office, national or local level. I have talked to and heard from many foreigners and Filipino balikbayans who can’t understand why, for example, it takes weeks or months to register and open a business in this country, when one can do it within hours where they come from. Fellow Inquirer columnist Joel Butuyan wrote last week of his Singaporean client who was shocked to learn that selling and transferring title to a real property can take several months to complete here, yet can be completed in a day in her country. At the height of the pandemic two years ago, a chemical testing lab in Calamba City, Laguna, that my former high school classmates co-invested in had to secure a permit from the Laguna Lake Development Authority. But they required that the application be filed physically at their office in Metro Manila, at a time when public and private transport was restricted by quarantine protocols. I phoned the office myself to inquire why we could not file the application online, and the lame answer I got was that their office did not have an online system in place. And as is almost always the case, this is a transaction that required more than one visit to their office. I could only sigh in exasperation.

Several years ago, I led a technical assistance project that helped the Bureau of Customs (BOC) strengthen its developmental role of trade facilitation (as against its more familiar role of revenue collection). Then Commissioner John Phillip Sevilla sought our assistance to track and document clearances and permits that importers had to obtain from agencies other than the BOC itself. What the stocktaking exercise revealed was that there are more than 7,000 imported products that require such clearances, many of them duplicating, overlapping, or unnecessary, required by dozens of agencies for the same product.

For example, to import a color laser printer with Wi-Fi capability, the importer would have to obtain a clearance from the National Telecommunications Commission because of its Wi-Fi feature. Clearance was also required from the National Bureau of Investigation, supposedly on the rationale that the equipment might be used for counterfeiting money. It also needed a license from the Bureau of Philippine Standards (BPS), as required for imports of electrical or electronic products. Exempted are shipments with valid PS license certificate that BPS issues to foreign and local manufacturers. Still, they had to get a certificate of exemption from BPS anyway (talk about redundancy!). Countless more products similarly need multiple permits from various agencies. I call them unnecessary hurdles. Others would call it institutional sadism.

Back to our chemical testing lab, the Securities and Exchange Commission (SEC) asked us for a clearance from the Department of Health (DOH), which we found was unnecessary as our lab would be testing substances, not people. Still, the SEC insisted we had to do the legwork to get a document from DOH to certify that we were exempted!

Our bureaucrats have turned redundancy into an art. I am often led to resign myself to the thought that our country will never catch up with our dynamic peers in the region, given the obstructionist mindsets driving too many people working in our government.