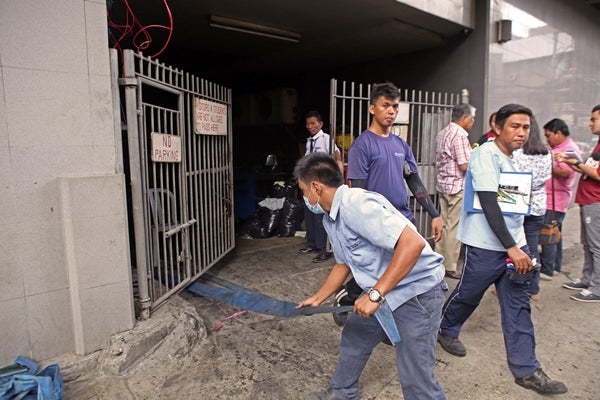 A lot of work still had to be done the morning after the fire. (CDN PHOTO/LITO TECSON)

Cebu City’s fire chief admitted their limitation in responding to the fire at the Cebu Doctors’ University Hospital that resulted in the evacuation and transfer of more than 200 patients to other hospitals last Tuesday night.

Chief Insp. Rogelio Bongabong, chief of the Cebu City Fire Station of the Bureau of Fire Protection (BFP), said they only had a limited number of breathing apparatus prompting them to rely on volunteer firefighters from the Emergency Rescue Unit Foundation and the Chinese-Filipino groups in penetrating the smoke-filled hospital.

As the better equipped volunteers ensured that nobody was trapped inside the hospital, government firefighters concentrated their efforts in containing and putting off the fire.

“Usahay naa tay kakuwangan sa paghimo sa mandato namo kay kulang sa mi sa equipo pero naninguha mi nga padayon nga mapa-improve ang among serbisyo (We sometimes get challenged in doing what we are mandated to do because of lack of equipment but we try our best to improve our service.),” Bongabong said.

No casualties were reported but at least five paramedics and rescuers including Cebu City Councilor Dave Tumulak sprained their arms while helping carry hospital beds during the evacuation.

“Thank God nothing bad happened during the transfer of the patients. Everything was very systematic,” said Tumulak, who is also head of the city’s disaster command center.

A total of 32 ambulances responded to the alarm.

Cebu Doctors Hospital remained closed yesterday. They had nurses and ambulances placed at the hospital entrance to especially accommodate out patients scheduled for examinations and refer these to their sister hospital, the North General Hospital.

Only the basement was damaged. The lobby was black but intact. All patients’ room and major hospital equipment were spared. Although the Veco Transformer and one generator was damaged by water and chemicals, two spare generators remain. We will assess the situation again tomorrow am and get to the bottom to how the fire started.

He said that an appropriation of P168 million is being proposed in the city’s 2015 budget amounting to a total of P18.9 billion for the purchase of new trucks, an aerial ladder, safety gears, breathing apparatus and even fire boots.

Read Next
The wall gets 72-hour reprieve