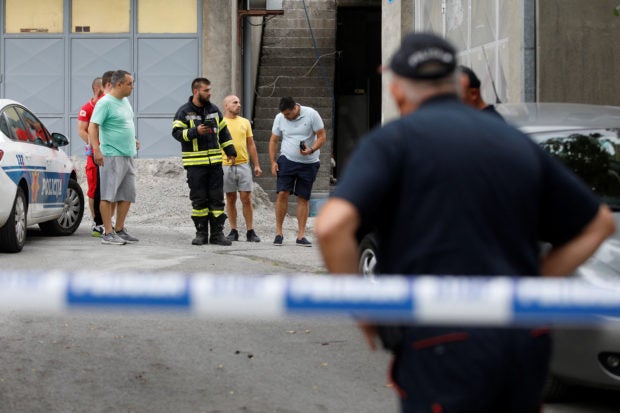 Rescue personnel talks to citizens at the crime scene of a mass shooting in which 11 people, including the gunman, were killed, according to local media reports, in Cetinje, Montenegro August 12, 2022. REUTERS/Stevo Vasiljevic

BELGRADE — Eleven people, including two children and a gunman, were killed in a mass shooting in Montenegro on Friday, and six others were injured, a state prosecutor told Vijesti TV after an initial investigation of the crime scene.

Local media initially had reported that a total of 12 people, including a shooter, had been killed.

“When we arrived at the scene we saw nine dead bodies, including two children, and another two passed away on their way to the hospital,” Andrijana Nastic, a state prosecutor, told Vijesti TV.

Nastic did not say how old the children killed were and could not reveal details regarding the identities of the victims. Media reported earlier that a policeman had been among the injured.

“I can only say that the shooter was killed by a citizen (civilian),” Nastic said. Media earlier had reported that police had killed the shooter.

Media reported a man from Cetinje had opened fire at random in his neighborhood after a family dispute.

“I was deeply disturbed with reports about terrible tragedy in Cetinje. I express my deepest condolences to those families affected and all those who lost their loved ones,” President Milo Djukanovic tweeted.