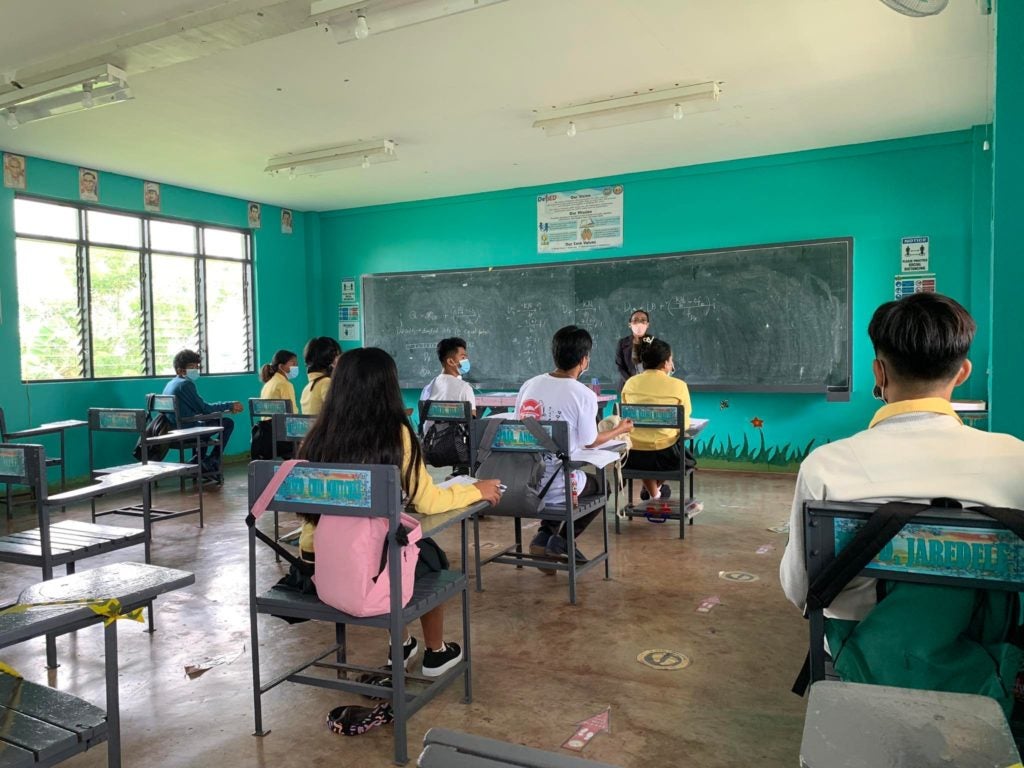 Students follow social distancing protocol in a classroom of the Bitlang Integrated School in Cebu City, which is one of the schools that has started limited face-to-face classes. | CDN Digital file photo

CEBU CITY, Philippines — All 11 police station commanders in Cebu City are directed to coordinate with their respective barangay and school officials in securing the opening of the face-to-face classes this August 22, 2022.

However, strengthening of security would not only end on the first day but would continue in the next days, said Police Lieutenant Colonel Maria Theresa Macatangay, information officer of the Cebu City Police Office (CCPO).

Macatangay said that their security plan was already ready to make sure that students would not be victimized by opportunist criminals.

She further said that the entire force of the CCPO would be deployed and the deployment would be done in tandem with the Task Force Kasaligan and other civilian volunteers.

To date, CCPO has around 1,200 police personnel.

“Dili lang ana nga adlawa (It will not only be just that day), we ensure that it will be a consistent deployment. Not necessarily that they will be found in one location. So they will be given a respective area in which they will be able to patrol in order to cover a wider area nga pagabantayan (to secure),” Macatangay said.

“There will be police who will be posted on these schools. However, they may not be necessarily posted on a fixed area in the school because they should be roving around (and) because they have to know the environment,” she added.

A few of the preparations include manning possible traffic going in and out of the perimeters of the schools. They will also coordinate with the barangay and school officials in order to apprise and remind students not to allow criminals to take advantage of them. The city’s Police Community Relations office will be distributing flyers and installing tarpaulins printed with all emergency contacts, particularly of all the police stations on that day as well.

Apart from that, Macatangay said that police will also encourage the participation of the business sectors in the area that have employed security guards.

Further, Macatangay encourages the community to coordinate with the police to attain a peaceful community for all, especially the learners.