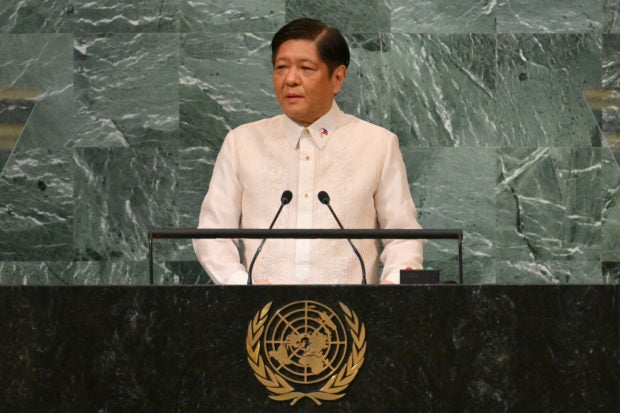 NEW YORK CITY, United States — President Ferdinand “Bongbong” Marcos Jr. on Friday (Saturday, Manila time) pointed out that the Philippines has no territorial dispute with China – it is China that is claiming Philippine territory in the South China Sea.

“We have no territorial conflict with China. What we have is China claiming territory that belongs to the Philippines,” the President said in his address at the Asia Society.

He added that the Philippines has made it “very clear” to Beijing what it “feels” about the matter.

Marcos also said there is already a “modus vivendi” or a way of life in Asia, where nations have found a way to live with each other in peace despite rising tensions.

The problems, however, still exist.

“The events in the last few months really have pointed out that those problems had not really gone away. They’re just bubbling under the surface and they now have come above the surface. And we have to face those challenges and we have to deal with them,” he said.

This is where, Marcos said, the Philippines relationship with the United States becomes “important” to be able to manage the said problems.

In his meeting with US President Joe Biden, Marcos said the Philippines looks to the US in maintaining peace in the Southeast Asia region.

He said the Philippines appreciates the US’ role in maintaining peace in the region, adding that the country is “especially fortunate” to have a “very strong foundation” of a long and strong relationship with the US in political, diplomatic and economic relations.