Riding off of the successes from previous singles, which have managed to travel far beyond their hometown of Cebu, the Cebuano duo is back with yet another bop that’s certified to embed itself into the pop culture psyche of the South and those that are even remotely familiar. Cookie$ and Fonzy have worked together since 2011, with the latter helping the former initiate his rap career in 2019 through a random visit to Toronto via Atlanta after years apart. The two instantly reconnected with a shared passion and appreciation for the hiphop cultures of their respective North American cities, and eventually found a way to share that experience authentically to audiences in their hometown. You may have also noticed these two as forerunners of the “new school” breed of Pop Punk in the Philippines (circa 2012). Both played together in the pop punk band, Drop Decay who have gone on to do multiple tours and released a string of singles via Sonic Boom Philippines during its peak. 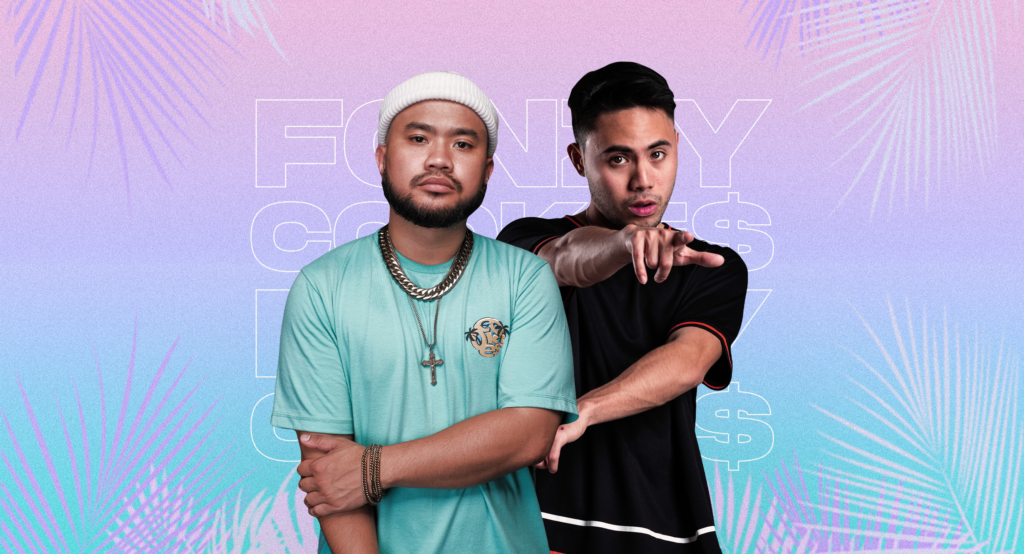 Cookie$ and Fonzy have worked together since 2011, with the latter helping the former initiate his rap career in 2019 through a random visit to Toronto via Atlanta after years apart.

Since the rapper’s beginnings, Cookie$ has gone on to release singles such as Bisdako and Bogo to name a few.  Bogo having received the attention of notable hiphop/culture podcaster Adam22 of No Jumper. Shortly thereafter, Cookie$ and Fonzy then released their single “Beplop”. The single was a hit online and in festival and club grounds, and audiences across  the country grew to be even more familiar with the single which lends itself to the meme of the same name. Most notably UMG had picked up on the song in the early part of 2022. Fonzy had also played upon this trope on his single “Swaggy B”, which means “move aside” .The single was released at the height of the 2020 pandemic and has over 700K Streams – the accompanying  video features multiple influencers who made cameos and was also a viral hit.

“Palmolive” marks the return of the two with a brilliant play of words and vivid experiences that highlight the Cebu vibe with a global sound.  The disco/funk inspired motifs were drawn from Fonzy’s earlier childhood influences with the genre, and marks the beginning of his new established sound as an artist/producer which will kick off a string of releases starting late this year. It also reestablishes Cookie$ significance as a bearer for the Cebuano culture with his impeccable rhymes and delivery which have proven to draw in audiences across generations and classes. The single will also be included in Cookie$ upcoming project, which takes inspiration from similar retro/nostalgic sounds injected with an urban twist. Palmolive drops this September 23rd under The BakeShop Studios and Too Much Internet.

Tony Fonzy drops new single ‘Hate That I Miss You’