City Council to DPS: Submit garbage truck inventory on or before Oct. 5 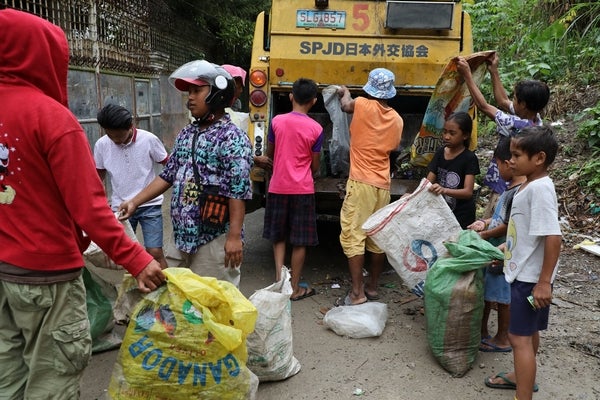 Residents of a Cebu City barangay help load their trash to the truck during a garbage collection round in their area in this March 20, 2017 photo. | CDN FILE PHOTO

CEBU CITY, Philippines — The Cebu City Council has agreed to request the city’s Department of Public Services (DPS) to submit an inventory report of all the city-owned garbage trucks on or before Oct. 5, 2022.

Councilor Nestor Archival brought this matter through a proposed resolution that he filed during the council’s regular session on Wednesday, Sept. 21.

This was after residents of some barangays, particularly Barangay Guadalupe, complained that their garbage had not been collected for weeks already. Cebu City has a total of 80 barangays.

In his resolution to the City Council, Archival said that Barangay Guadalupe also acknowledged having difficulty collecting trash because it lacked adequate trucks to service its 30,000 households.

The DPS is providing trucks to help Barangay Guadalupe and other barangays, but the city only has a limited number of trucks due to the numerous borrowed trucks that are needed for everyday operations.

Currently, Archival said the city government has 14 trucks deployed to collect garbage on major roads. The city also allocated another four garbage trucks to various barangays to use in collecting their trash.

Archival, initially, wanted the DPS to submit the inventory on Sept. 28, 2022, but he later agreed with the suggestion of Councilor Jocelyn Pesquera to give them ample time to do it or within two weeks or until Oct. 5.

No Time To Waste: A collaboration