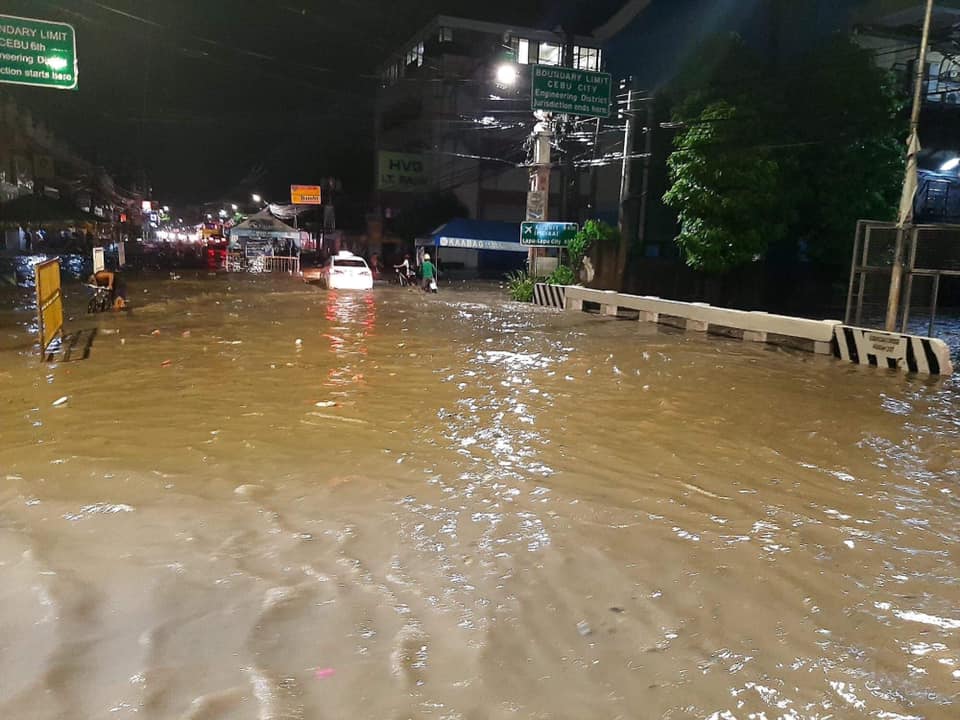 Flood water half submerges vehicles along a portion of M.J. Cuenco Avenue near the border of Mandaue and Cebu Cities after the Subangdaku river overflowed due to heavy rains in this Oct. 13, 2020 photo. | CDN Digital File photo

But most of these have not been implemented to date, said Cebu Provincial Board Member Glenn Anthony Soco.

During the recent session of the Provincial Board, Soco sponsored a resolution urging the Department of Public Works and Highways (DPWH) through its Secretary Manny Bonoan to give special focus on the implementation of the Metro Cebu Integrated Flood and Drainage System Master Plan Project to address severe flooding here.

“May the DPWH facilitate the speedy downloading of the budget appropriated and intended for said plan. This Body earnestly requests that the DPWH would promptly look on the expeditious completion of the project which had been planned for several years. Apart from budgetary constraints, the agency is likewise urged to look into other causes in the delay of its implementation and provide for solutions to the same,” read part of Soco’s approved resolution.

Soco moved for the pssage of the resolution after PB members invited DPWH-7 officials led by Regional Director Ernesto Gregorio Jr. during their regular session on Sept. 05, to apprise Capitol officials on the status of the master plan’s implementation.

In a statement which he released on Saturday, Soco said, that in 2017, the DPWH through its Unified Project Management Offices (UPMO), District Engineers Office (DEO), Regional Office, Flood Control Management Office and with the assistance from the World Bank, JICA, PBB, etc., came up with the Integrated Flood and Drainage Master Plan.

The DPWH in its report, mentioned that one of the major causes of flooding of Metro Cebu is the “overbanking of rivers, natural depression of urban and rural areas, undersized or absence of drainage lines or outlets.”

In order to hasten the implementation of projects identified under the master plan, these were distributed to the different District Engineering Offices (DEOs) here with its appropriation funded under General Appropriations Act of 2019.

Quoting the DPH-7 report, Soco said, these projects which commenced in 2018 amounted to up to P44 billion and were set for implementation in 10 years.

“However, due to the limited budget available, they were only able to implement a total amount of P1.8 billion for the different rivers in Metro Cebu. This is apart from other issues hindering the completion of the project,” part of Soco’s statement read.

The Central Visayas Regional Development Council also passed Resolution No. 17, series of 2020 to request DPWH to allocate additional funding for the implementation of the still unfunded drainage projects in Metro Cebu and considering tapping the Official Development Assistance as a one-time funding source.

Soco said severe flooding that was now experienced in Metro Cebu was an indication of the “pressing need to fast-track and hasten the completion of the Integrated Flood and Drainage Plan Master Plan in order to address these concerns.”

Just recently, Mandaue City was placed under a state of calamity after flooding affected 11 of the city’s 27 barangays and caused over 400 families to evcacuate.

Knee-level flooding had also been experienced in other parts of Metro Cebu like Cebu City and Consolacion town everytime that there would be a heavy downpour, he added.