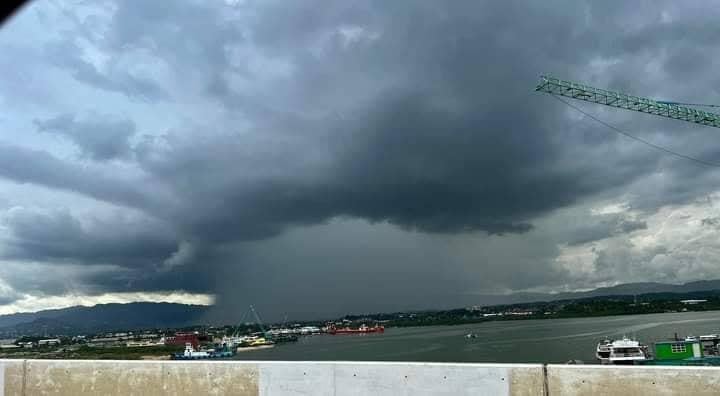 Dark, heavy clouds hover over parts of Metro Cebu as the state weather bureau based in Mactan issued a rainfall warning for Wednesday, Sept. 28, 2022. | photo by Paul Lauro

CEBU CITY, Philippines — Metro Cebu is expected to have better weather starting on Thursday, September 29, 2022, until Sunday, October 2, 2022, according to Pagasa-Mactan.

Jhomer Eclarino, Pagasa-Mactan weather specialist, said that though Metro Cebu will still have partly cloudy to mostly cloudy skies, with isolated rain showers and localized thunderstorms starting Thursday but sunny period or breaks within those days will prevail.

(The isolated rain showers are expected in the afternoon, evening or early in the morning. But the rain starting tomorrow until Sunday will be around one to two hours or less only. We expect that from Thursday to Sunday, there will be longer times without rain.)

Parts of Metro Cebu experienced moderate to heavy downpour that caused flooding in some parts of the metro on Wednesday, September 28, 2022.

Moderate to heavy rain showers produce rain fall of between 5.5 to 7.5 liters per square meter per hour.

Eclarino explained that the downpour on Wednesday was caused by two weather systems affecting the country.

These are the Habagat or Southwest Monsoon and a low pressure area (LPA), which as of 3 p.m. was estimated (based on all available data) at 405 kilometers East Northeast of Guiuan, Eastern Samar or 425 km East of Borongan City, Eastern Samar.

He, however, said that the LPA is less likely to develop into a tropical depression within the next 48 hours.