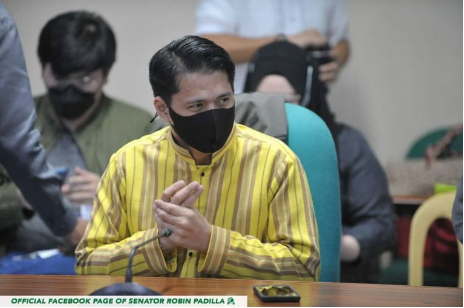 Robin Padilla admits being puzzled with the popularity of Korean-made shows among Filipinos, as he stated that Filipino are more “handsome” than Korean talents.

(We are confused because when we look in the mirror… we look more handsome than South Koreans. We did not [get plastic surgery] because my nose, no matter how many times it had been punched, it had never been fixed.)

Cruz believes this is due to the years that South Korea took to hone the craft in order to improve the film and TV industry.

(…The public is seeing the product of many years that Korea took to reach where they are now. A lot of discipline and help was given to them. Right now, they are at the forefront of Southeast Asia.)

(I do believe that, not to brag, we are better when it comes to film, to acting. We have more great actors. Maybe we have been a little left behind when it comes to technology and preparation to be at the same level as them now.)

Tuesday’s hearing was also the same hearing wherein Sen. Jinggoy Estrada said that it had crossed his mind to have foreign-made shows banned to possibly boost Filipino productions.

This idea did not sit well with some netizens and celebrities including Parokya ni Edgar frontman Chito Miranda and comedian Pokwang. They stressed that instead of banning foreign films, the local film and TV industry should receive more government support, similar to Korea.

Estrada has since backpedaled on his comments about a possible ban. He clarified that he does not mean he is against K-dramas, but that he only wished Filipinos would show support for local movies the same way they do with foreign productions.  /ra

Chito Miranda, Pokwang on idea of banning K-dramas: ‘Not the solution’