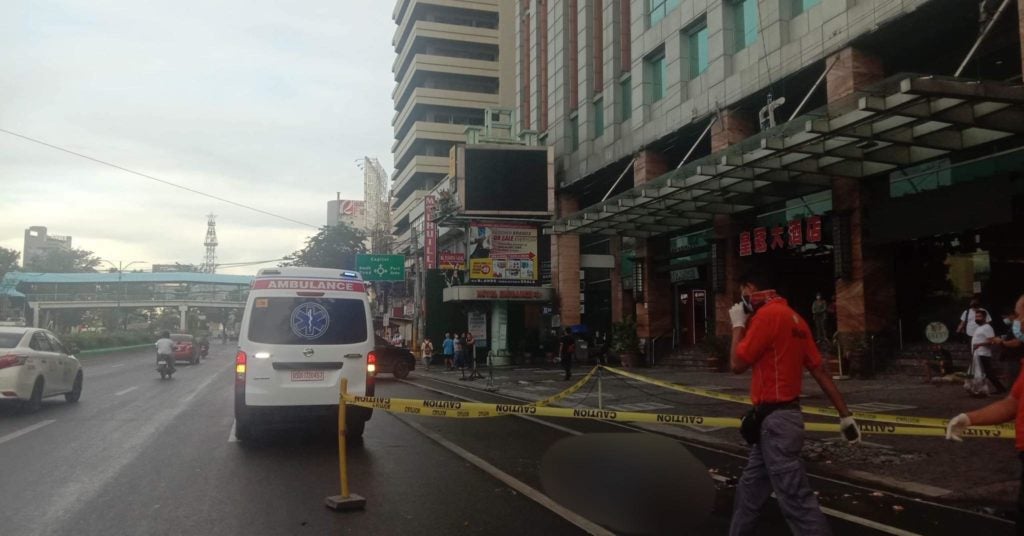 Police are checking if there is possible foul play in the death of a woman who reportedly jumped off or fell from a hotel in Cebu City. | Paul Lauro

CEBU CITY, Philippines — Police will request for an autopsy of the body of a massage therapist who reportedly fell or jumped off from the 38th floor of a hotel located near the Fuente Osmeña Circle in Cebu City on Monday, Oct. 24.

This was to check if there was possible foul play over the victim’s death, who was previously noticed by her workmates as problematic and disturbed a day before the incident, said Police Lieutenant Colonel Wilbert Parilla, deputy director for administration of the Cebu City Police Office.

Parilla said that they already had the name of the victim, who was on her late 20s, through the recovered identification card but they refused to divulge her identity for now.

Quoting information from the Abellana police investigators, Parilla said that the victim was seen inside the hotel around 5 a.m. on Monday, Oct. 24, and she went inside the elevator heading to ninth floor moments before the incident. She again boarded another elevator and went to 37th floor.

Police said that the victim possibly went to the 38th floor where her believed-to-be belongings, including her bag, pair of slippers, and a tumbler, were found.

(We will subject her to an autopsy and thorough investigation should be conducted to prove if there was foul play on what happened.)

The body of the victim was found lying on the road just outside this hotel. Police allegedly found a piece of paper from the victim’s pocket with a ‘suicide note’. However, police could not yet rule this death as an apparent suicide because an investigation was still ongoing.

Parilla said that the victim works as a massage therapist at the building, and she was still new in this job.

He further said that the day before the incident took place, the victim reportedly talked with a duty guard, at that time, and asked how she could go to the 38th floor.

Mental Health Day: The need to defuse a ticking time bomb for millions