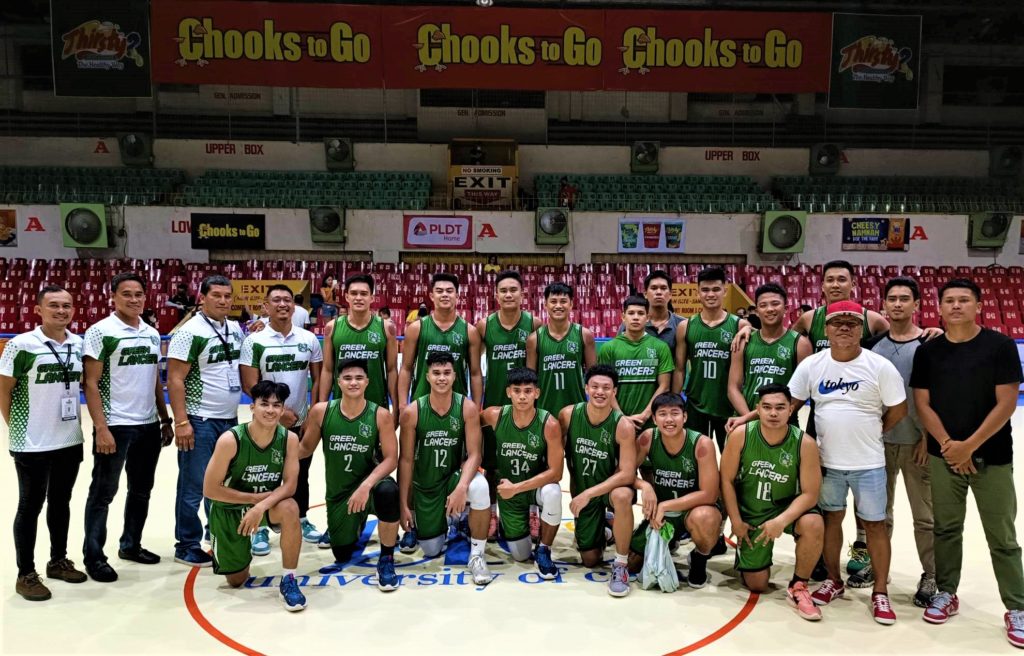 The UV Green Lancers players and coaching staff pose at center court after beating the USC Warriors to remain undefeated in the Cesafi men’s basketball tournament. | By Glendale Rosal

CEBU CITY, Philippines — The University of the Visayas (UV) Green Lancers are virtually unstoppable in the Cebu Schools Athletic Foundation Inc. (Cesafi) men’s basketball after stretching their unbeaten run to six with a, 75-59 rout of the University of San Carlos (USC) Warriors on Tuesday evening at the Cebu Coliseum.

The Green Lancers cemented their position at the top of the team standings with another lopsided win, while the Warriors dropped to a 2-5 (win-loss) record.

For UV’s head coach Gary Cortes, they are only making the most of what they have in the team after they were badly affected by the Covid-19 pandemic like the rest of the Cesafi member schools.

“What I did was, I made the most out of the materials (players) that I have and I adjusted to the current style of game being played this season. Basically, my players have their own styles compared to what I had in 2019. That time my players were bigger compared to this roster which is mostly smaller,” said Cortes.

In 2019, the Southwestern University-Phinma Cobras dethroned the Green Lancers in the Cesafi men’s basketball tilt, and after that, Covid-19 happened.

“Since we only have a few big men in our team, we greatly rely on hard work and determination. Plus, my players have the heart and the will to win a championship and you can see that with our 6-0 standing,” added Cortes.

“We hope to maintain our momentum all the way to the finals. What I’m worried about are injuries. Currently, Jimpaul Amistoso and Berin Laurente are injured. Hopefully, they can recover soon.”

Zylle Cabellon, who was on the starting five to replace the injured Amistoso, had a good game by scoring 11 points.

Like most of their previous games, the Green Lancers had a slow start, with the Warriors grabbing a slight, 35-34 lead midway through the second period.

However, they turned things around after dropping an 8-4 bomb for a, 45-39 lead heading into halftime.

The Green Lancers then uncorked a 17-5 run in the second half to establish a commanding 18-point lead, 62-44, with Robles and Cabellon combining for 13 points.

In the final period, the Green Lancers stretched their lead to 23 points, 71-48, with 3:01 remaining, with Saga topping it with a jumper.

The Green Lancers are poised to sweep the elimination round with only four games remaining against teams they have previously beaten.

Their next game is on Saturday, against the CIT-U Wildcats, at 5:00 PM.

Meanwhile, USC will try to bounce back by taking on the UC Webmasters on Saturday at 3:30 PM.   /rcg