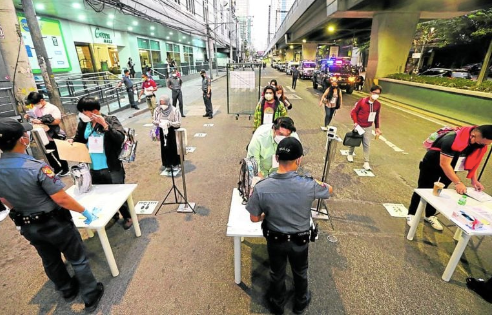 FILE PHOTO: Bar examinees present their health declaration forms before they are cleared to enter the De La Salle University campus on Taft Avenue in Manila on the second day of exams on Sunday, November 6, 2022. The southbound lane of the thoroughfare from Quirino Avenue to Estrada Street was closed to traffic. INQUIRER/NIÑO JESUS ORBETA

MANILA, Philippines — Majority of law schools in the top 10 Legal Education Institutions (LEIs) that had the most bar passers from 2011 to 2020 are from Metro Manila, with Ateneo de Manila University (ADMU) producing the biggest number of new lawyers during the period.

These were the findings of the Legal Education Board (LEB) which recently released its review on 119 LEIs nationwide and the performance of their law school graduates for the past 10 years. The board said its study included the results of the 2020 and 2021 Bar Examinations since it was held jointly in February this year amid the COVID-19 pandemic.

The report further showed that by region, the National Capital Region (NCR) or Metro Manila had the highest number of bar passers in the same span.

Read Next
WATCH: A dog who plays dead goes viral