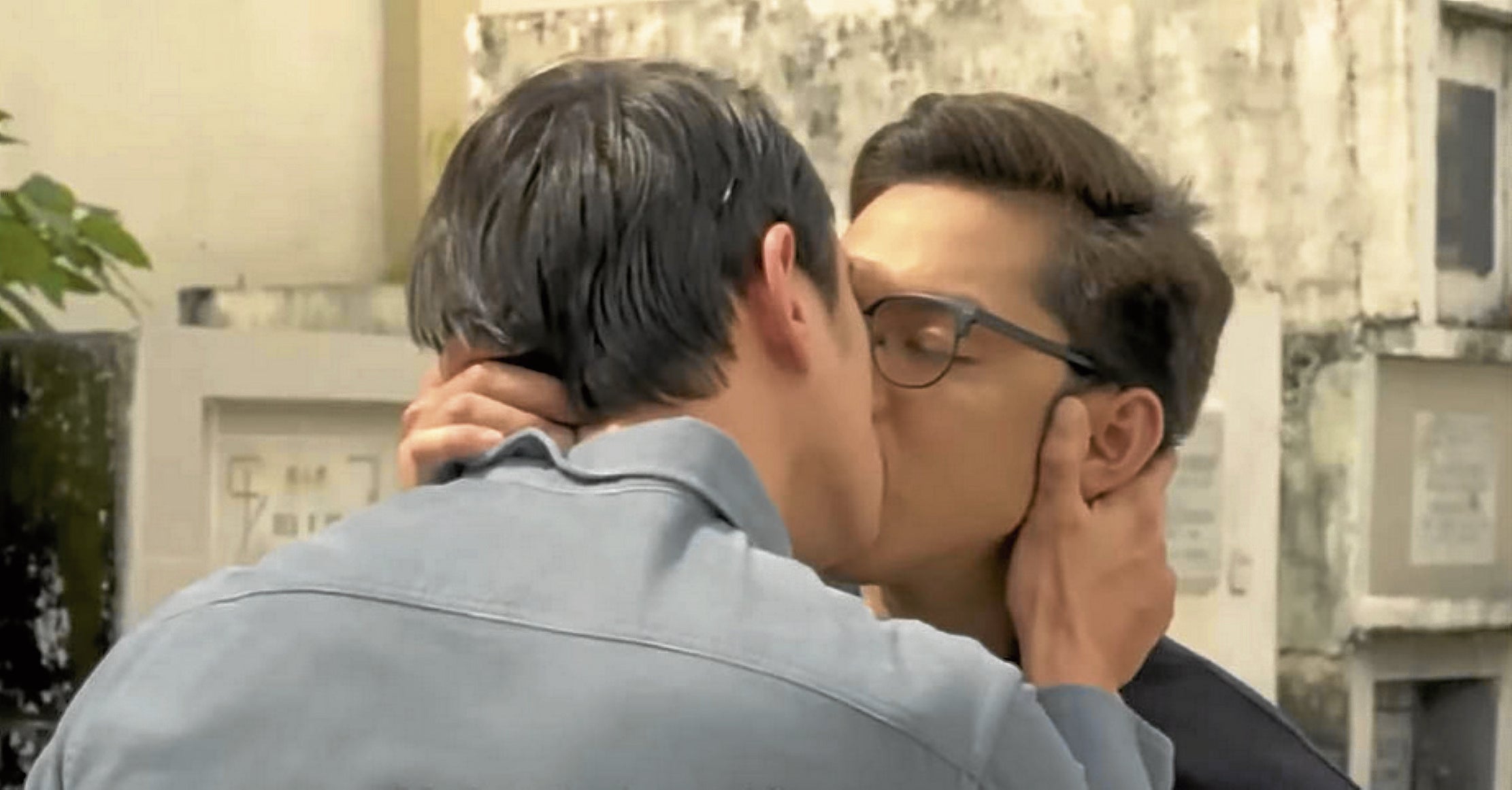 “We’re thankful for the conversation,” declared actor Jake Cuenca, who is once again the subject of social media buzz after a video clip from the trailer of the movie “My Father, Myself”—where he is seen kissing costar Sean de Guzman—went viral and became the subject of various memes.

At a media gathering to promote the Joel Lamangan dramatic piece, Jake said: “When we look at comments, it’s natural that we simply choose what we see. Taking note of the negative comments is the same as seeing a thousand comments on my Instagram saying otherwise. A lot of people are commenting that they find the story beautiful and that they have never seen something like it before.”

The film, which is an entry to the 2022 Metro Manila Film Festival (MMFF), revolves around Jake’s character, Robert, who is married to Amanda (Dimples Romana) and has a daughter named Mica (Tiffany Grey). The family adopts Matthew (Sean), whose biological father is Robert’s deceased best friend and lover, Domeng (Allan Paule). Conflict ensues as Robert becomes sexually attracted to Sean while the latter impregnates his stepsister, much to the shame of the family matriarch.

“One thing is for sure, we’re thankful for the conversation. At the end of the day, that’s what we really want—for the movie to be hyped. For me, it’s more painful if no one talks about the movie at all,” Jake told reporters.

Dimples agreed by saying: “While Jake is grateful for the conversation, I feel I’m most grateful for the people who are not just talking about it, but are also taking interest in it because that’s the most important first step.”

She continued: “As artists and members of the creative team, we can’t keep telling the same stories again and again. There will always be people who will come up with a different twist to old tales, just like the premise of this movie. It’s based on a true story. Don’t we all want to hear an intriguing story of somebody we have never met before?”

“It’s interesting to discover that a story like this actually happened before. I wonder what everyone involved in the story felt. If only we take a little bit more time to listen and understand, then we will probably pick up lessons here that we never thought we needed in our lives,” Dimples pointed out.

Meanwhile, Sean said he admitted to have felt slightly hurt when he read the negative comments. “Some said, aren’t MMFF entries supposed to be happy and not controversial? It’s sad because they judge the entire movie based on what they saw from its trailer,” Sean pointed out. “On the other hand, I’m happy that a lot of people still promise to support the film despite what they’ve read from bashers. I’m proud to be part of this film, to have had the opportunity to work with Direk Joel and all my amazing coactors. I just wish people will give the movie a chance.”

Tiffany said that when she saw that the trailer was already uploaded online, the first thing she did was look for people’s positive reactions to it. “For me, the negative comments are also good because they made the movie a trending topic. I just want to tell everyone that we didn’t make this movie just so you can see something daring or controversial. Try to watch the whole film. You might actually learn something from it.”

Based on real events

We then sought the reaction of Quinn Carillo, who wrote the movie. “It’s not a BL (boy’s love) film. It is based on the experience of Direk Joel’s friend. I simply expanded the story. I interviewed people and consulted a friend, who used to be closeted, to be able to effectively describe the nuances of people with this kind of personality,” she began.

“I can’t blame the bashers. I understand their sentiments, but what they’re saying is that they want all representations of the LGBTQIA+ community to be positive—that doesn’t happen in real life. If that’s the only thing we aspire to see, then that’s idealism and romanticism,” Quinn pointed out. “We tell all kinds of stories. What I did in this film was that I treated each character as a human being. I didn’t try to put labels and stereotypes. This is all about people having to face reality, happy or otherwise.”

Dimples pointed out that since the film is based on a true story, “we cannot invalidate what these people went through just because we don’t know what it feels like. Also, love is universal. People share love with anyone they choose to share it with. While it may entail pain, sometimes, or shame, and even forgiveness, love is love. Admittedly, I was taken aback when I first saw the controversial scene between Jake and Sean. It was really something!”

For Sean, however, doing the kissing scenes with Jake wasn’t a big deal at all. “We usually start by throwing lines, and then we simply react to how we feel. That’s why all the scenes came out so naturally,” he explained.

Jake, who has already shot a gay-themed movie with Lamangan titled “Lihis” in 2013, pointed out: “This is so much different from “Lihis.” Our entire shoot was smooth-sailing. I guess it helped that I didn’t feel any reluctance from Sean, as well,” Jake said.

“I see so much potential in him. He has made a fan out of me with this movie. It’s amazing because Sean has just started acting and was already given difficult projects like this. I don’t know a lot of people like Sean, who can perform well right away.”

“My Father, Myself” is coproduced by 3:16 Media Network and Mentorque Productions. It will be screened in local cinemas nationwide starting Dec. 25.

Jake Cuenca confirms split with Kylie Verzosa: ‘This was us’