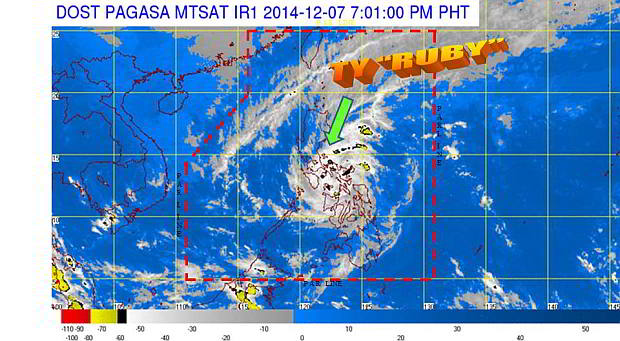 As of 5 p.m. yesterday, the Philippine Atmospheric, Geophysical and Astronomical Services Administration (Pagasa) located the eye of the storm in the vicinity of Aroroy, Masbate.

The state weather bureau reiterated serious concerns for flooding as “Ruby” continues to dump heavy to torrential (10 to more than 30mm/hour) rainfall in areas within its 500 kilometer diameter.

The storm maintained its maximum sustained winds of 140 kph and gustiness of up to 170 kph.

“Ruby” is expected to make its third landfall in Sibuyan Island between 2 – 4 a.m. Monday.

In Cebu, the northern part of the island continues to be pummeled by strong winds up to the afternoon hours yesterday. The northern coast of Cebu has also been battered by strong waves.

Data from rain gauges of Project Noah in Catmon and Tabogon towns in northern Cebu showed heavy to torrential rains for hours yesterday.

Rain measurement sensors in Bantayan Island no longer transmitted rainfall measurements for most of Sunday.

Pagasa classifies flood alert warnings depending on the amount of rainfall in a certain area.

Yellow: Indicates 7.5 to 15 mm (heavy) rain in the last hour and likely in the next two hours, and possible flooding. The public is asked to monitor weather conditions.

Orange: Indicates 15 to 30 mm (intense) rain in the last hour and likely in the next two hours, and that flooding is “threatening.” The public is asked to be alert for possible evacuation.

Red: Indicates more than 30 mm of rain in the last hour and likely in the next two hours, and that serious flooding in low-lying areas may occur. The public is asked to evacuate.

In Metro Cebu, light to moderate rains prevailed throughout the day.

Weather is expected to improve Monday as “Ruby” moves farther away west.

“Ruby” is forecast to be around 60 km east of Calapan City, Oriental Mindoro or 160 km south of Quezon City on Monday.

Metro Manila has already been placed under public storm warning signal no. 1 since Saturday evening.

Forecast track on “Ruby” has been changing from time to time because of its erratic ground speed that has been fluctuating from 10 – 15 kph. At times it seems it is not moving at all or quasi-stationary, according to meteorologists.

As of 5 p.m. Sunday, northern Cebu, Bantayan and Camotes islands, and Cebu City remains under signal no. 2.

Signal no. 3 has been raised in Masbate, Ticao, Burias Isladn, Marinduque, Romblon and Oriental Mindoro.

Damage reports has not yet been confirmed in areas plowed by the storm.

But photos of homes submerged in floodwater, fallen trees and power lines, and structures made of light to medium materials blown away started to filter the social media last night.

At its strength, Pagasa said damage could be significant especially in areas under signal no. 3 as “Ruby” winds and rainfall could cause  “heavy damage to agricultural plantation, medium and large trees maybe uprooted,” among others.