The lady with the looks struck again, this time, she allegedly run away from a salon in Cebu City after getting pampered and for failing to settle bills at a resort in midwest Cebu.

Last Dec. 4, the lady identified as ‘J’ was accused of skipping payment of P2,000 to a salon where she had manicure, pedicure, hair color and eye-lash extension. The owner of Nails and Cocktails Salon in Raintree Mall in barangay Capitol Site Christy Sigvathesen posted a photo in Facebook of ‘J’ who was having hair services at her salon. She had warned the public about her alleged ploy.

“Please be aware of this lady named Belle. She came in the salon Thursday (December 4) around 6 pm. She took advantage of almost everything the salon had to offer. She was chatty and friendly and boasted about her poultry business and metal works in Balamban. She first got manicure and pedicure while having her hair dyed. She was extremely satisfied and asked for more services. She asked for highlights and eyelash extensions. She stayed in the salon til 1230 AM. When she was all done, she said she miss some cash and had to run to the ATM. She left her bag and ran out,” Sigvathesen said. 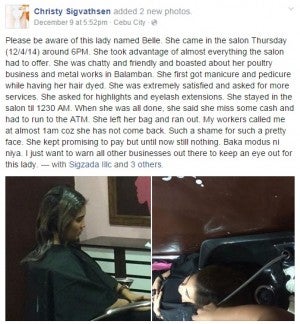 Then today, around 10 a.m. ‘J’ was escorted by authorities to the Asturias police station after the management of Cabo Resort, where she was staying since Dec. 8 reported her for failure to settle her bill reaching P15,000.

Asturias desk officer PO3 Victor Talimpo said ‘J’ was escorted by the barangay captain and barangay tanods. The owner of the resort plans to sue ‘J’ for estafa.

PO3 Dianne Molejon, head of Women and Children’s Desk said that ‘J’ had told the resort owner that she is short of cash and that her friend who is supposed to pay for the bills did not arrive.

‘J’ was previously reported to have shoplifted P20,000 worth of clothes from a boutique in Mandaue City last August 12.

‘J’ is from Sogod, Southern Leyte and has visited the resort three times this year.